Sandy Lee wrote a post recently about her job, and I agree with her comment that we’re so busy blogging about our weight-related issues that a lot of us haven’t taken the time to mention what we do for most of our waking hours (apart from think of food and sex of course – reverse the order if male).
My working life started off down the secretarial route, probably because I had taken a quick course in shorthand and typing before I went to university in Bristol UK, and it seemed natural to apply the skills I had learned – and I wouldn’t be blogging to you now if I hadn’t.  Between one job and another I made the transition to administrator, then to office manager and finally admin manager at a wholesale seed merchants. 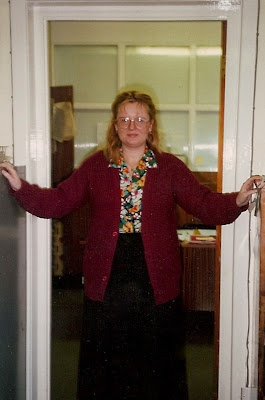 1990
.
I held this job for 19 years and enjoyed being involved in agriculture; there were farmers to talk to about whether it had rained; knowledge to be learned about cereal  and root crops, the best forage grasses for milking herds and the best sward for a golf course, lawns and wildflowers... 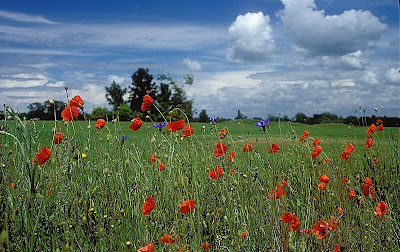 I took this picture on a golf course in Surrey,
to show how the 'roughs' can look attractive
with wildflora.
.
…and about how to import cargoes of seed from New Zealand or to export them to Chile.   One stormy winter’s day a container ship went down in the Bay of Biscay, a notorious area of choppy seas off the northern coast of Spain, and most of the containers were lost, including some of ours which were full of turnip seed.  The repercussions of the insurance claim were a paperwork nightmare and continued for several years afterwards, but I always wondered what the fish made of the massive food drop from heaven, and whether it turned any of them vegetarian.
I also chased people for money – with different strokes for different folks:  easy does it with the farmers, discuss the weather and their crops for 15 minutes before broaching the subject of the outstanding invoices, and whether they had remembered to upturn the bucket where they shoved their paperwork in their dusty, rarely used offices, and sort through what was ours...
Yes, this could have been a ruse, but they would also ring you to admit with embarrassment that they had just found your cheques which they had forgotten to cash from three years ago and could you please re-issue (it was a two-way relationship because they bought seed from us and also grew certain types of seed for us under contract).    The other creditors were a mixed bag – the classic excuse for not paying was to say that the seed hadn’t come up, and to the customers we knew well who came up with the same old chestnut, we would counter with ‘that’ll be because you’ve sown them upside down’.
One customer was a wholesale merchant who dealt with farmers in south west Wales where he lived (a simply gorgeous part of the country), and he couldn’t pay us till the farmers had paid him.  He was fond of telling us that the only way to get paid was to forget the telephone – he had to trek from one farm to another, bumping along muddy country roads in his Land Rover, and sit down to chat with the farmer and his wife, have a cup of tea with them, sample a slice of her freshly made fruit cake and after the second cup of tea, gently mention about those invoices (old boy).  It was a slow business, and an afternoon of this could become pretty uncomfortable.
Sometimes I used to get one of the reps to collect in person if it was in his area and the customer was dodgy.  The difficult ones were often the turf suppliers, who didn’t want to pay you because they had to grow the seed, shape it into turves (I know, hardly the plural of turf, but that’s how it’s known in the trade...) and sell it on, and then wait 30 days to get paid themselves.  So we often had to wait 60 or 90 days.  One of them was proving so difficult that after much pressure he agreed to bypass his bank and pay in cash, but would only hand it over in a pub, where the rep had to pretend he was a drinking pal, since his ‘business associates’ (i.e. creditors) were everywhere.

The rep duly turned up at a pub in Yorkshire somewhere, and was alarmed to note that it was in a very seedy part of town.  The pub itself was full of broken glass in the car park, and the smell inside was beer and –er - formerly beer, empty crisp packets on the floor, cigarette butts ground into the carpet, and so on.  He got his drink and sat down nervously with the turf grower, who after a while put his hand under the table and passed our man a large wodge of cash (about £5K if I remember rightly), while they pretended to talk amicably about this and that.  The rep had an apprehensive few hours trying not to drink too much, before slipping out the door, getting into his car and driving away at top speed, and he told us later that he had slept that night with the money under his pillow and a cricket bat by his bed.
Our holding company was an old and respected agricultural business in Banbridge, County Down, Northern Ireland, and I was lucky enough to travel there several times over the years for training (in a tiny plane from Bristol – argh). 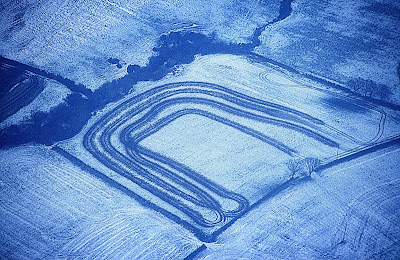 Returning from Banbridge one year, to find Bristol under snow.
I thought I knew where I had parked my car, but they were all
white.... it took an hour of tottering up and down
on high heels before I sank thankfully and tearfully
into my little Rover Metro!
They were unfailingly charming hosts, and nothing was ever too much trouble.  At the beginning (in the late 80’s and early 90’s) there was a high military presence in the town, you couldn’t miss it.  There were barricades on certain streets and, confusingly, many different types of uniform.  Security was tight everywhere, and reminiscent to me of the seventies in Buenos Aires, during the era of the military dictatorships when I was a schoolgirl.
They had business connections of course with the Republic of Ireland where there were many cereal farmers, but I had mixed feelings as far as credit control was concerned:  they could charm the birds of the trees, no doubt about that, and the myth about Irish people kissing the Blarney Stone is no myth – I can’t think of a more entertaining nationality to talk to over a drink.  But still I can’t bring myself to recall the admin abilities of the typical Irish farmer without wanting to bang my head repeatedly on a table.  On one occasion after yet another fruitless telephone conversation with someone when I could almost hear the sound of his head being scratched at the other end, he burst out “listen now, I’ve been through all the invoices with a fine toothbrush, and I can’t find it, so I can’t”…
From a working life point of view those were happy years, and when redundancy came in 2007 I was devastated, though not surprised, for I had seen the problems being faced by the agricultural trade.  It makes me sad now to remember all those kind, funny, earthy customers I got to know – mostly by phone – and not to be able to follow their lives.  Several of them rang me when they knew I was leaving/had left, to be reassured that ‘I had been treated right’.

I’m still in touch with Mike, a salesman who has gone on to better things within the company, but who is like a younger brother to me, and was a natural model at our camera club. 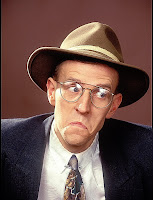 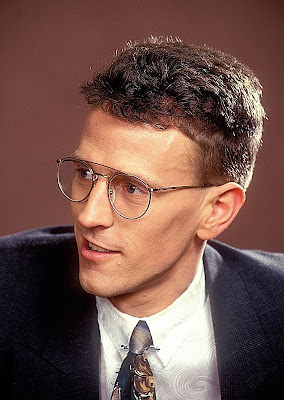 I’ll tell you about my present job next time.  (Never let it be said I can tell a story in one go!)
-oOo-
Photo Finish:
From Lonicera's non-digital archive
Visit to St Ives, Cornwall 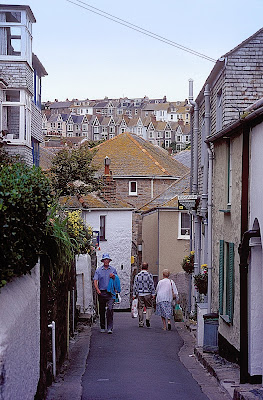 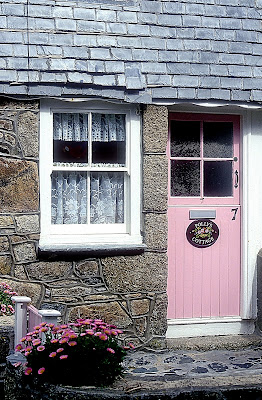 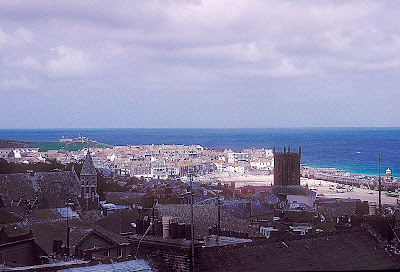 -oOo-
Go to Part 2
Return to most recent post

I used to do that also - chase money but it was for a Doctors surgery lol. Love your beautiful pictures. You may have missed your calling in life - you should have been a photographer (or is that in part 2.. your secret life!) xx

Wonderful post. But I have to agree with Cara. Your photography is amazing.

way hay--good to see your post today. I agree The pics are lovely. and I am reading away on the book you send (finally). The job change has given me so much time to do what I want!!

Caroline, Oh how I love to read your stories. What an interesting job and to think you lived in Ireland! The countryside where you live is remarkable and your pictures are beautiful. You inspire me to write about my profession as well. Perhaps. . .

I think you could also earn a crust writing stories - you're a fabulous story teller! I love that picture of the house with pink door but then as you've maybe guessed from my blog and my self published coffee table book - I am fascinated by doors! Zxx

Wow - what a nice reaction, thank you all! I tend to ramble on (once described as "an overdeveloped mission to explain") but must admit I enjoy it. I usually reply to previous comments before starting the new post, but didn't this time, so if you've left a comment and haven't heard, please don't be offended, I'm about to catch up now!
So glad you like my pictures - they've given me so much fun over the years.
Caroline

Loving your blog! There's plenty of reading to do here, so I'll take my time. Great pictures , We have something in common: I also started my working life as a secretary :)

Thank you Pamela! I'm so glad you found my blog, hope you like the pictures I posted today, though they aren't of Patagonia. I much enjoy your stories and pictures.
Caroline