The denial continues
.
In case it isn't obvious, I don't much enjoy showing these pictures, but I realise that this is the point of this whole warts-and-all exercise, and I've noted that other bandit bloggers have shown their worst. I feel I can but try to do the same, particularly if it's to help me move on.
.
On a positive note, it's down to John that there's any photographic evidence at all of me during these years. I often felt positively poisonous that he was taking the picture at all (most of the smiles are pretty strained!) but came to realise that in the future there would be no record to show that whereas I may have been too large, at least I looked young and my skin was smooth. I recognised that in old age I would probably come to appreciate this record - albeit imperfect, so I tried to stop looking miserable when he pointed his camera at me.
. 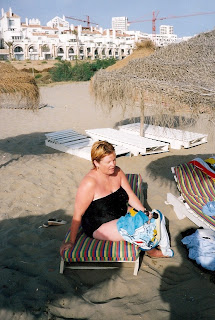 Picture № 32, 1996, Gandía beach, Spain
.
...Have you ever found yourself in a bathing costume, using a towel as cover, under the misguided impression that no one will notice your size?
.
I worked in an office with young women who were always on diets and talked about them the live long day. As the office manager I could remain in the background, but it made me all the more determined to shut that particular door forever. At 14 stone (196 lbs, 89 kg) in the early nineties, I had let it go too far. I knew no diet would ever work for me because it involved immersing myself once again, and for too long, in a subject that now bored me to tears. I could no longer stand the idea of thinking about food all the time. I didn’t want to think about it, I didn’t want to talk about it, and I certainly didn’t respond to those who brought up the subject. John understood, and I shall always be grateful to him for that.
.
. Picture № 33, 1996, John catching me unawares, as usual. 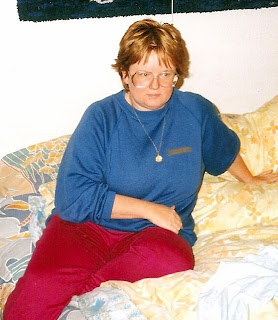 .
I was now on insulin because pills couldn’t control my diabetes. Dieticians would talk earnestly to me about losing weight to help the diabetes, but the most I could manage was to try to learn to eat savoury and not sweet calories – at which I was moderately successful and can now steer clear of chocolate bars and puddings most of the time. But I would tell myself that it was merely swapping sweet for savoury, and it was definitely not a diet. I could no longer cope with this word.
.
The problem was that my weight refused to stabilise (as I fondly thought it would), it just kept creeping up. I love to cook and try out new recipes, John was always very appreciative, and we ate out a lot (in order of preference, Thai, Chinese, Italian, pub food). Although I like fast food as much as most people, it requires driving some distance from where I live to satisfy these whims, so I rarely bothered. I shopped at the supermarket once a week, and as I’m not given to convenience foods, preferring to prepare dishes from scratch, the impulse buying instinct, though present, was not out of control. Finally, my insulin consumption was industrial, and I knew what happens to the body when the diabetes is not properly controlled. The weight crept up simply because I ate too much of the right stuff.
Not that I ever climbed on the scales during this phase – perish the thought – but even I had to acknowledge that my clothes were getting tighter, and I started to shop on eBay. I found that (1) I had left size 18 way behind and there weren’t many places where I could buy clothes that would fit me; (2) I was too easily tired to contemplate traipsing round the shops, and (3) I didn’t care anyway.
.
In 1998 I sold the flat where I had lived for 13 years since my divorce, and we bought a house on the outskirts of Bristol. I acquired two lovable cats, completed my china dinner service by purchasing odd pieces on eBay, and gave dinner parties to experiment with the oriental and fusion recipes I had grown to adore. I bought a bread machine and had a wonderful time experimenting with the wonder of fresh breads of different kinds (I still find it to be a most wonderful invention, if only I could eat more than a morsel at a time…).
.
Picture № 34, Christmas 2001 (aged 48 and goodness knows what weight), with my mother, sister & niece.
.
There are few photos of us for a long period here – almost ten years, because John stopped using the stills camera when I gave him a camcorder, which became his pride and joy. I was forever trying to hide from the wretched thing.
.
The situation might have continued indefinitely, but family issues caught up with me.
.
(Next time will be the last instalment, you will be pleased to hear - hence this one is a bit shorter. )
.
-oOo-
Go to Part 8
Return to most recent post

Caroline, how tired you must be to have carried all this around inside for all these years. The pain you had to be going through makes me want to cry. Having had self image problems myself makes me hurt for you. Not that you don't have happy times, but the pain is always in the background waiting to jump up and bite you on the butt as it were.

Thank John for taking photos... even though you hate them. You needed them for this journey.

Ok-one more installment and you can wipe the slate clean and focus on what is ahead of you! Success baby! It is just right around the corner and you now have the tools to get there.

I noticed your comment about not being able to eat the bread from the bread machine anymore. I have noticed there is a mourning process you have to go through with the food that is not band friendly. I have gone from sadness and yearning to feeling powerful that I can face a loaf of bread and not end up with diet failure (remember the night I ate the bread and then did not get any dinner at the Italian restaurant?) Huge mourning!!

I have also found that living vicariously helps-I follow a blog that documents good burger joints in Texas...well it is so I can at least look at the tasty items even if I cannot eat them anymore.

Really one morsel is the best tasting bit anyway.

Helen, you're right, I'm so heartily sick of the whole subject - do you know, if and when I feel I'm a normal size one fine day, I'm quite sure that quite unconsciously I shall simply not hear diet conversation any more, and in the supermarkets my eyes will slide past the lite/low cal options as if they were invisible. Self-consciousness has stopped me doing so many things, and I don't want to waste another precious minute. Thank you so much for your always perceptive comments.
And Tina too - yes, I'm managing to think ahead most of the time now, which is such a relief. And you're so right about mourning foods I can no longer have. The most painful without a doubt will be when I next visit Argentina and find myself unable to eat the wonderful steak, or the schnitzels I'm so fond of (very finely sliced steak coated in egg and breadcrumbs and fried in hot oil, and generally served with mashed potato, for those who may not know what I'm talking about - my ultimate and all-time comfort food...makes my eyes water just thinking about it, and is very bad for my blood sugar levels...) Sigh.
Caroline

Caroline, you are most courageous. I bet John loves you like Vince loves me, just the way I am. I was able to evade the diabetes but I am not certain how because both of my parents had late onset diabetes. We will make this work. Thank you again for sharing.

It is hard looking back over old photos and remembering how you felt at that time. I have always been in total denial about how I looked... subconsciously avoiding having my photo taken or positioning myself behind other (and hiding behind towels!!). I am glad that I have those photos to look back on, even though the memories are painful, and the same will happen for you - those photo's are in the past and the future is looking mighty fine... luv ya you very brave and super honest woman.

Caroline....I think what you are doing is amazing...I admire you so much!!