Chemo ain't so bad when you consider the alternative...

I've been away from my blog for a long time, and before starting to write my stories again, I’d like to explain what the last couple of years have been like.

I realise I've lost all my readers and that it’s a slow process to get them back, but I’ll be patient.  More importantly I love to write and I use the blog for practice; I’m still in search of my ‘style’.  I imagine my blog as a sort of magazine with articles, stories and pictures; broadly speaking my idea was to introduce English speaking people to the non-political Argentina where I grew up and to tell about people and events which might interest you and where no version exists in English.

It’s not a journal, none of it is ‘yesterday’s news’ – there should be no difference if you look down the left hand side of this screen and click on the links now or in ten years’ time.  Each entry (or series of entries) stands alone.  Whereas old magazines are discarded and journals become irrelevant, quite simply this is my legacy.

My beloved partner John died on 18th March 2013, and he took part of me with him.  I longed to believe that I could re-create “Ghost”, the film with Patrick Swayze and Demi Moore, where for a while they found a way to communicate from either side of the divide.  Had it been possible I have no doubt whatsoever that he would have done so, but there has been nothing, apart from the odd puzzling (and slight) whiff of cigarette smoke every now and again.  But I talk to him anyway, and my great companion Banjo has the usual feline approach to these things (“She’s talking to herself again.  Oh well, as long as she keeps me fed…”)

2013 unrolled slowly, and work as research administrator at a hospital in Bristol kept me thinking about other things for some of the time.  In January 2014 I got another nasty surprise – an ultrasound the previous November for something else, detected what was later confirmed as ovarian cancer, and I started on chemotherapy in February.

It’s one of those stealthy cancers that are rarely caught early because you simply don’t feel it.  In my case it has not been caught in time, but my oncologist tells me that although I probably will not go into remission, I've responded very well to several months of chemotherapy either side of a surgical intervention last May, and they are very pleased with my progress.  My family and neighbours helped me while I was weak from the treatment and the operation and wanted to sleep all day, and after nearly 12 months I have returned to work, though only for 2 days a week.

I can honestly say I've had virtually no pain or discomfort, except during the week I was in hospital and for a week after that.  I have a physically lazy personality; you don’t need to tell me to rest. I would try looking at my blog every so often, but my brain couldn't seem to cope with it.  Freecell was as far as I got…  I have been surprisingly sanguine about the whole experience – I say “surprisingly” because I don’t understand why I’m not scared out of my wits, why I’m not neurotic about each stage of the treatment, why losing my hair wasn't the end of the world.  I’m told I’ll need chemo again some time this year, and though the oncologist tells me they’ll keep me going for a long time, understandably he won’t be drawn on specifics.  But that’s OK too.  Neither do I mind talking/writing about it, so if you want to comment there's no need to write "on tiptoe".

I think it’s because losing John was infinitely more devastating to me and I feel nowhere near getting over it – it will be 2 years in March.  Such things as my body falling to bits don’t seem as important.

My mother died of ovarian cancer in 2007, but she was at a very advanced stage and detailed analyses and examinations were never carried out.  Nevertheless we know these things can be passed on in the genes, so for the sake of my sister and niece we took part in a study to find out whether I carried the deadly genes – there are several.  All came back negative, and we've been told that until new genes have been discovered as carrying the mutation, they will assume that it was just coincidence.  I have to say I don’t believe this, but my niece’s husband is a doctor, and we will follow his advice on what we should do next.

This isn't all doom and gloom – there have been quirky, amusing times, such as the old gentleman in the room next to mine in the hospital who was operated on the same day as me, and though he never knew, we both shared the same gaseous discomfort on that first night.  I know because at some point in the middle of the night there was a sustained trumpet sound – astonishingly long actually – at the end of which I heard a very Bristollian sounding “Aaaaah – BOOTIFULL!”  coming from him.  I was horribly jealous and didn't see the funny side till the following morning.

My hair – my vanity disappeared with it, during the 2014 hot summer when I was forced to wear a windsock-looking thing on my head when there were people around.  It was strange to discover how quickly I could control heat and cold – remove windsock if hot, put back on if cold.  It was essential to wear it at night.  Banjo remained unimpressed throughout.  When out and about I was so self-conscious and worried that it would slip off the back of my head that I’d pull it right down to my eyebrows.  Mirrors were best avoided, but it was quite nice not to have to think about combing my hair.  It grew back straight up, at right angles to my head, and I made the transition from 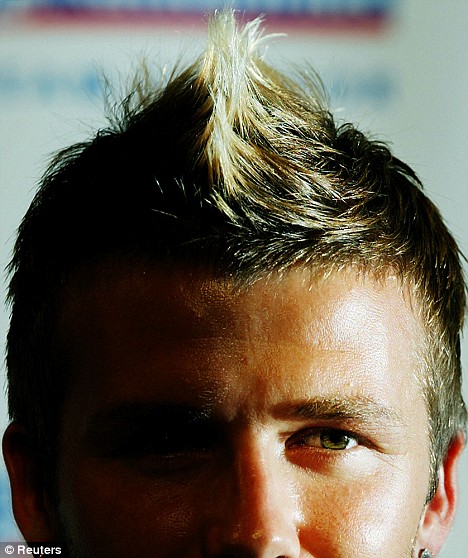 
Did it grow back curly, you ask?  Well, there’s a kink that wasn't there before, but the startling thing is the colour – I was originally mousy brown, then reddish, as per my blog picture… and now I’m dark grey with white temples… and virtually black on the top!  Somebody asked me the other day if I’d been dying it purple.   It took 5 months for the upstanding hair to flop over.  I’ll lose it again when they put me on the stronger chemotherapy, which I hope won’t be this year.

There has been plenty of time for my nails to grow, and to give in to the temptation of painting them again.  I found a product on the market which will thin gummed up nail varnish leaving it as new, so I painted them different colours every other day, and watched them grow longer and longer as somebody else did the housework.  Banjo’s reaction was interesting, to say the least.  He’s not an aggressive cat at all, but clearly my nails became talons in his eyes, and when near me his eyes would be fixed nervously on my hands.  I was sometimes scratched when trying to stroke him.  This tendency has disappeared altogether since I cut them short before going back to work, and have not painted them for a couple of weeks.

Judge Judy – I’m now a self-confessed Judy Junkie, and if you know where to look, you can watch her for large chunks of the day and night on British TV.  I have a tablet, so I can watch her anywhere I want, and lie in bed with it turned on one side…  Lovely.  The cases are 10 minute ‘video bites’ my chemo brain can cope with, and I like her Punch-and-Judy attitude to welfare spongers generally.  The only thing I’m disappointed she doesn't deal with is people who have vehicle accidents when they were on their mobile phones at the time.  I've never heard her condemn drivers who speak on their mobiles while driving.  And … why does the show pay the settlements?  The losers never get punished, and it seems crazy to me.  The British equivalent, called Judge Rinder, does the same thing.

Of necessity there has been quite a lot of television in the past year, and apart from the above, and enjoying “The Big Bang Theory”.  I have come late in the day to enjoy “Everybody loves Raymond”, where most of the characters are funny in their own right.

Not for the squeamish but important if you have a gastric band:  If there are any readers out there who originally read my blog when I had a gastric band fitted to help me lose weight, it might interest you to know that for me it has been incompatible with my cancer treatment.  This is simply because chemotherapy can bring on nausea, and you have to take anti-emetic medication (or life isn't worth living).  Conversely, to enable the gastric band to work you have to be able if necessary to remove blockages by making yourself sick, and with anti-emetics inside you, you can’t.  After several panicky events, I went back to the bariatric hospital where they fitted my band, and asked them to unfill the band completely.  There has been no problem since then.

So that’s it folks.  It brings you up to date.  I’m doing fine, but the events over the past 2 years have made me re-evaluate what I want from life, and that it’s time to leave to one side what does not give me pleasure.  I don’t know as yet what form this will take, but I’ll keep you posted.  All I know is that my blog most definitely DOES give me pleasure.  I continue to read all the blogs I store down the right side of the screen, and am so glad you’re all doing well.  I have several stories in the pipeline and hope soon to be back to my old concentration levels to write them.