"Pussycat, Pussycat, where have you been?"
"I've been to London to visit the Queen."
"Pussycat, Pussycat, what did you there?"
"I frightened a little mouse under her chair!"
(16th century nursery rhyme)
.
My sister and brother–in-law put us up for a few days in Romford, so that Vero could see London.  I was grateful that she came with us on the first day – I’ve lived far away from big cities and public transport for too long, and the number of underground/subway changes needed to get from one point to another had my head in a spin… as did the urgent need to chain myself to her in case I lost sight of her.  Vero on the other hand hadn’t a care in the world – she knew there were two people looking after her (well, one was leading and the other one was pretending she was quite confident, teeth clenched to stop them from chattering… what a wuss).
And the crowds…it was full tourist season, and the queues to get into the Madame Tussauds waxworks were three hours long - four people wide and snaked round the four sides of the square – at £25 a throw, I reckon the owners are laughing all the way to the bank.  Needless to say we didn’t go there.
London is now totally multicultural, you would be hard pushed to find the ‘true Londoner’ of old that you see in war films.  Forget asking the way – not only would most people be unable to help you, but they wouldn’t understand what you were saying anyway.  Thank goodness the same old buildings are still standing.
We took one of these to go round the main sights: 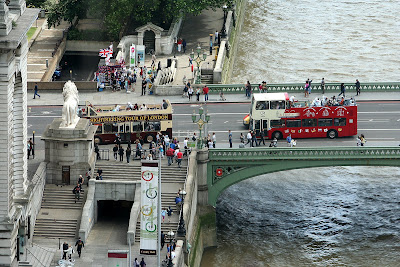 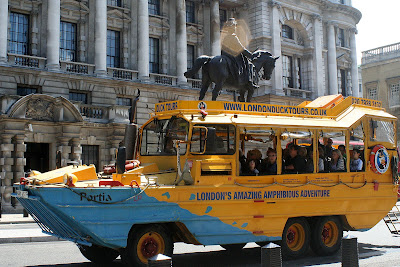 ...these buses chug their way round London crammed with tourists – apparently they’re World War II landing craft which have been turned into sightseeing buses.  Yes they really are amphibious, and I didn’t believe it for a second till I saw this – 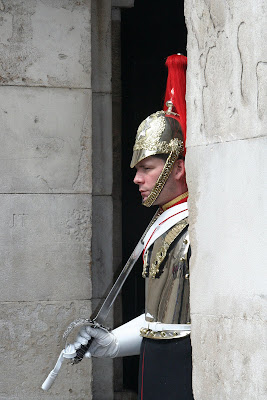 We watched the changing of the guard at Horse Guards Parade in Whitehall, and queued for ages so that Vero could be photographed first standing next to a mounted sentry... 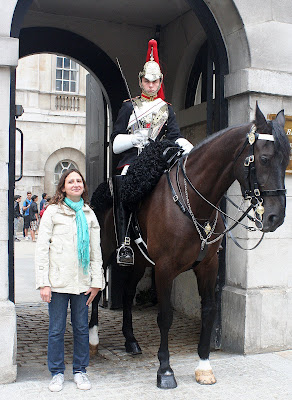 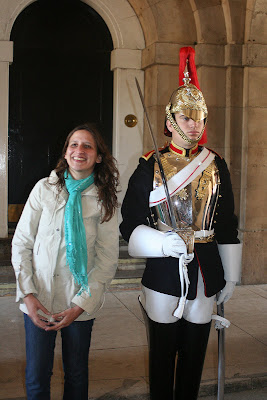 She looks a little uncertain here due to the combination of self-consciousness because of the number of people on the sidelines impatiently waiting to be photographed, and her awareness of the look of terribly pained yet patient resignation on the face of the lad as he stood to attention.  My sister’s breezy “Bet you wish you had a pound for every time you get your picture taken” was met with stony indifference.  (And I’ll bet they get far worse taunts to have to ignore…).  So that was another photographic box ticked for Vero. 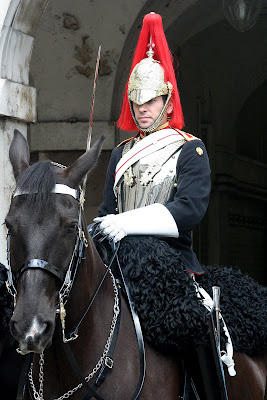 Me, I became instantly besotted with the magnificent horses, and fascinated by the puzzling moves they’re trained to carry out during the changeover. 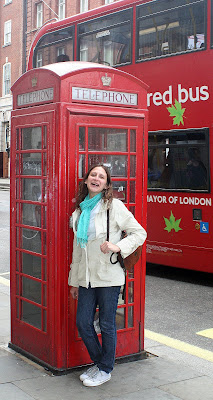 Another box ticked (the red phone box – oh do keep up) 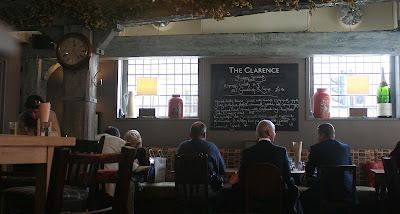 After lunch at an old pub called The Duke of Clarence…

… Next was Trafalgar Square 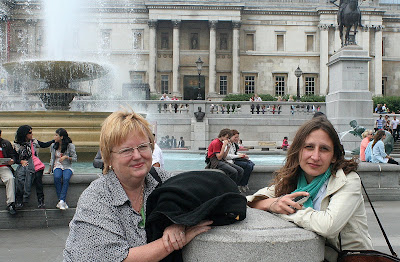 (can you tell my feet were killing me?!) 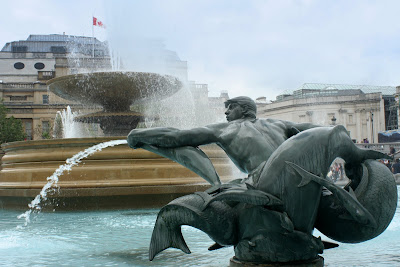 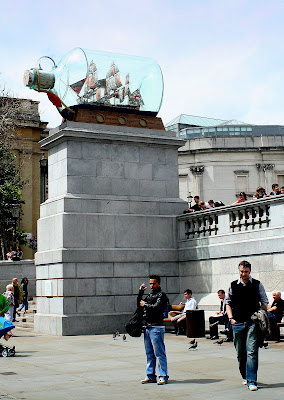 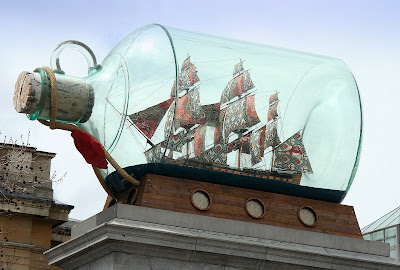 The Houses of Parliament and a gust of wind… 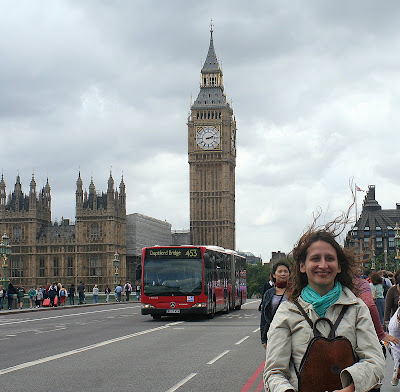 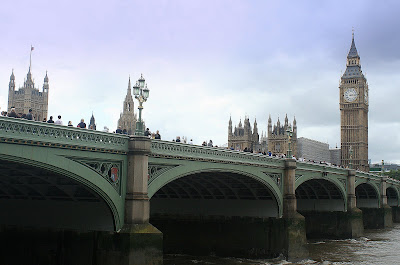 Westminster Bridge
A ride on the London Eye… 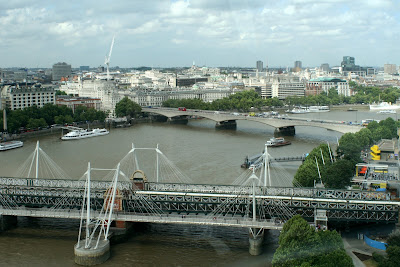 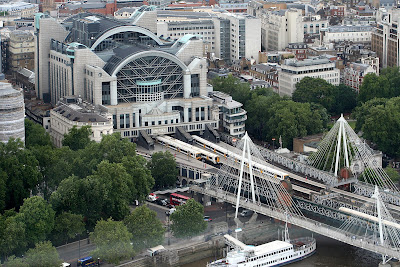 Up and away.... (Charing Cross station) 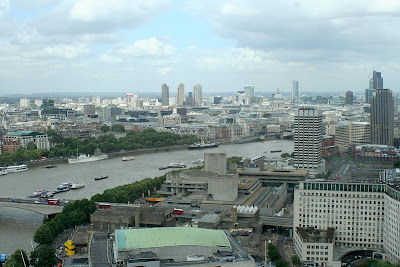 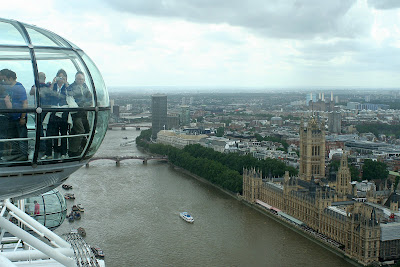 A boat along the Thames… 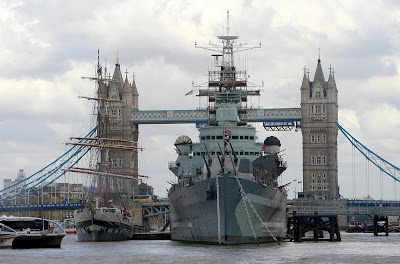 ...After which we headed home to Romford to collapse in an exhausted heap.
Next time – Romford market and Norwich.
-oOo-
Photo finish:
From Lonicera's non-digital archive
More of Bristol 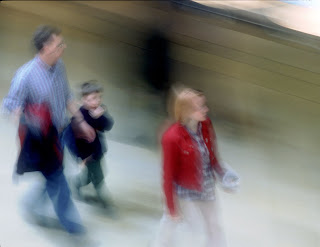 Shopping at The Mall, Cribbs Causeway 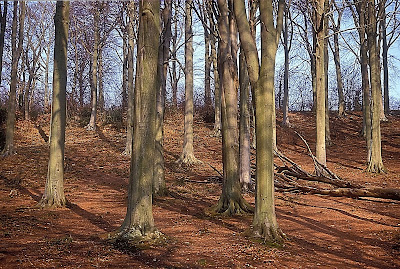 The woods near Blaise Castle 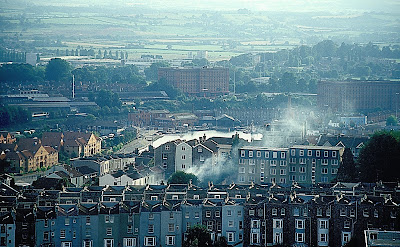 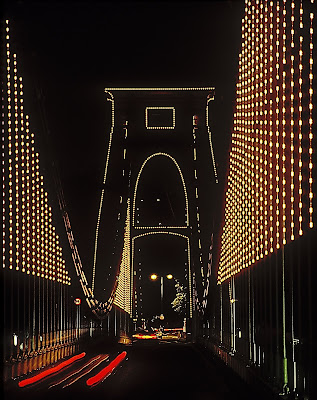 Another view of the Clifton Suspension Bridge -
this time at night. 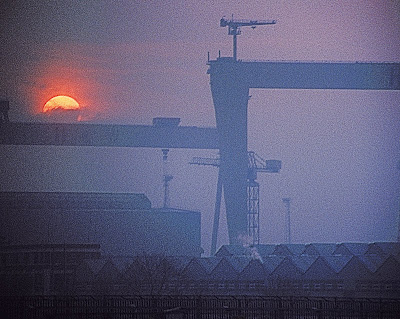 Evening in Bristol docks.
-oOo-
Go to Part 3
Return to most recent post

Wow, love the photos! Looks like quite and adventure.

Thanks Tessierose - actually it was. It did me a lot of good to get out of my comfort zone and do something different. And I lost 2 kg on that little jaunt, so I'm not complaining!
Caroline

Oh so nice to see all those sights of London - remember seeing them all many years ago when my then husband and I spent a week being tourists - I just love all the history - except of course the London Eye which wasn't there then - those views are amazing. And losing 2kg - well done you!!! Zxx

Those pics brought back memories of our trip to London last October. The weather looks cold. We had great weather and not so many tourists as in the summer. And my feet hurt like h*ll every night after walking on those cobblestones for hours each day. Want to see the countryside of England next time we go in a few years. At least you all speak the same language as me-or so I think you do! I find crowds harder now that I got older. Not sure why. I prefer the quiet and fewer people. The only thing we didn't do in London was go on the Eye. Loved all the other sights. Huge city and the underground is amazing.

ohhhhhhhh ahhhhhhhhh :) and look at your skinny self...I am gagging to come over again. Your pictures give me even more travel fever. I am in negotiations with David for a trip at Christmas. I think I am destined to always see the UK in Winter.

You would love the London Eye Zanna, you can't believe how much you can see from up there - and it's all gentle and quiet (takes half an hour, goes ever so slowly).
Sandy, the weather was mid summer, just that it was a slightly overcast day and there was a fair bit of wind. Just right for keeping you cool as you tramp about... I do agree with you about the crowds, I absolutely hate them - but in winter you get crowds from different parts of the world to the crowds in the summer... I've never seen so many people everywhere, all the time...
Skinny??!! I wish.
Caroline

I loved all the photos..particularly the one with you in it and the "gust of wind" one. It all looks so wonderful and exciting!

Thanks Nola! Have you seen the post (a couple back) with the pictures of John diving into my parents' pool? I thought at the time "hope Nola sees this"... It was fun planning it.
Caroline

I love your non digital pictues.
Maybe it's because they are old enough, so you´ve had the time to look them over and select the best ones.
Or are they all as good as these?

Matías, you're quite right - for every picture you see there were several similar ones, and at the time the slides were developed I just selected the best and chucked the rest. In other cases I've been able to zoom in and/or crop ones which were part good and part bad, or the underexposed ones, which thanks to Picassa I've been able to bring back to life. That section at the end was inspired by your blog, by the way - I do like the way you always finish with old family photographs and a postcard - it gives the blog a feeling of continuity, and links one post to another, not to mention a respect for the past, in your case, which I like.
Caroline

It was nice looking at all these pictures of London.
I had a pen pal for a couple of months then came over to visit her (she came to visit me in France at Easter.) I arrived in Victoria speaking hardly a word of English. She lived in Dagenham, near Romford. I fell in love with London and England then. I had come with a group (for the travelling part only) and was 13 ½ years old – it was in 1953 – so you see London was different then. I went back so many times I cannot count and loved every time I went. The last time I went my mother had just died and all the planes from Paris going to Atlanta were full until after Christmas, so I took the train to London, stayed 2 days (till Christmas eve) then flew to Atlanta. I was alone again and sad because of my mother’s passing, but being in London made me feel better. This was in 2002. Maybe I’ll go to London next Spring.

I'd forgotten about that nursery rhyme, I used to love that one when I was little. Though I quite like this version too:

A little cruel and I think I would have cried if I'd heard that one when I was younger but it does make me laugh now!

I was interested to see that you felt you'd lived away from big cities for too long, as I'm the opposite. I live just outside of London and I'm happy with that, as I'm close enough to go whenever I want to but far enough away to not see the dark side of it. My favourite part of London is Covent Garden, especially at Christmas. My mum and I are booked into London serviced apartments in Covent Garden for a weekend this December, I've been looking forward to it for months.

I love that picture of the Victory in a bottle too. Where is that? I've never seen it before.

What wonderful memories London seems to evoke... Love that poem, it really made me laugh! The ship in the bottle is new. It was the answer to 'what to do with the fourth plinth at Trafalgar Square'. Have a look at this link, which tells you all about it: http://www.dailymail.co.uk/news/article-1280834/Trafalgar-Square-Fourth-Plinth-Yinka-Shonibare-unveils-Nelson-s-Ship-In-A-Bottle.html

Thanks very much to both of you for your comments. Thank goodness I now get 'sneek previews' of comments sent to my e-mail, because I think I would have missed both your comments otherwise. How lovely to know that readers sometimes go back through the blog to bits that interest them... Thank you.

Thanks for the article, I'd never heard of that programme before! It's a great idea though and this bottle is a fantastic idea for the fourth plinth! Good to see I'm not too late to see it too, I'll have to make a point of going to see it. I'd quite like it to stay there for good but I suppose it's better to see a variety of pieces up there.

i love it so amazing gayyzzzzzzzzz really goood vICKY LOVELY