Nothing much to report about myself, other than the 'discovery' of the iPod Nano which I purchased recently to help get me through some of the repetitive work I do during my working day.  It's been wonderful to find that I can actually do more while I listen to stories, live radio and podcasts on the dear little square of black glass created by Apple.
An oldie-but-goodie to keep you entertained until I finish my next story...  (I originally put The Two Old Geezers in my other blog, Eavesdroppings and Stories, last May, and though re-told by me, is not of course my story).  It makes me smile to reflect that if my father had been alive today he would have been holding his sides - just his sort of story.
The Two Old Geezers
Scene

Butch and Sid were in their 80s and reckoned they were close to their last days of going out on the town, so they decided to have a final fling. After quite a few drinks, Sid suggested they carry on to the local brothel.

"Go up to the first two bedrooms and put an inflated doll in each bed. These two are so old and drunk, I'm not wasting two my girls on them. They won't know the difference."

The manager did as he was told and the two old men went upstairs and took care of business.

As they were walking home some time later...

Butch: You know Sid, I think my girl was dead.

Sid: Dead? What makes you say that?

Butch: Well she never moved or made a sound all the time I was lovin' her...

Sid: Could be worse, Butch - reckon mine was a witch.

Butch: Hell, what did she do??

Sid: I was makin' love to her, and kissin' her and such, and I gave her a little bite, and then she farted and flew out the window. Dang it, she took my teeth with her too... 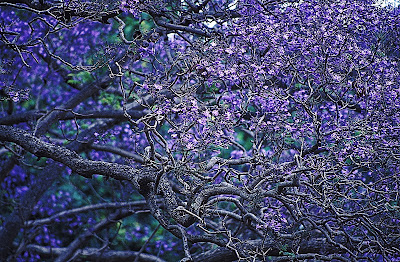 The glorious jacaranda in full bloom 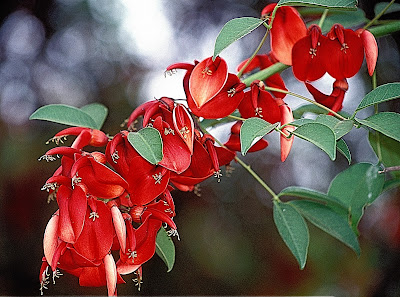 The blooms of the cockspur coral tree - Erytrina crista galli
known as the ceibo in Argentina, where it is the national flower. 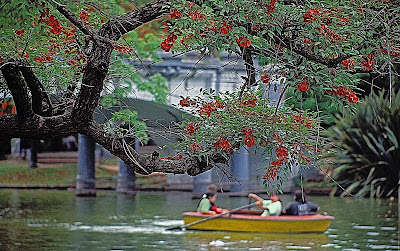 There are canals through the park where you can hire
boats to drift round on lazy Sunday afternoons
under the shade of the ceibos... 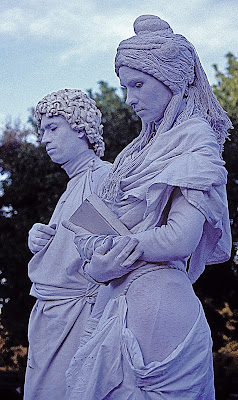 Some living statues nearby hoping you'll drop a
coin in the hat, watched avidly by children waiting
for a fly to land on their noses... 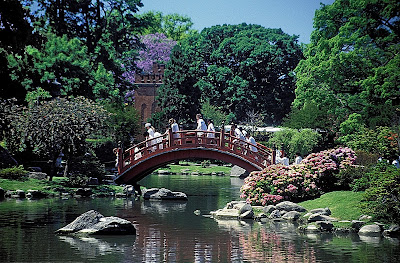 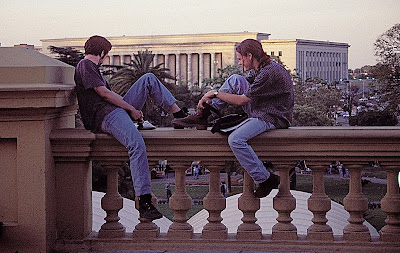 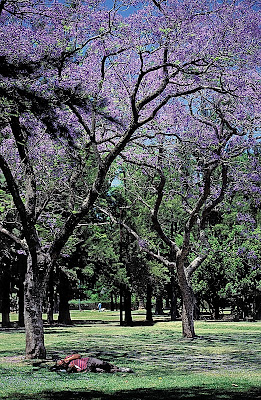 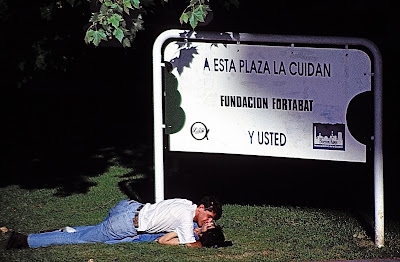 This picture was taken at Plaza San Martín,
but I wanted to include it because it made me smile.
The sign says "This park is cared for by the Fortabat Foundation
.... and You."
I don't think that couple was paying attention...
-oOo-
3 comments 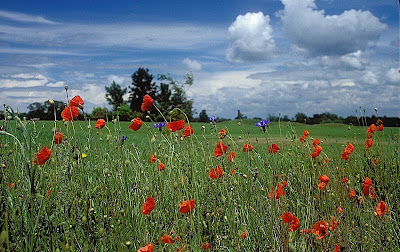 I remember a great uncle and an uncle of mine, both with the same name, who died in the First and Second World wars respectively.  They joined up because they wanted to fight for freedom, but sadly did not survive long enough to see action.
I remember my grandmother’s desperate sadness and the large silver-framed portrait of the handsome young man in the RAF uniform, ever present on her dressing table for the thirty-eight years between her third son’s death and her own.
I remember my mother telling me about a generation of young men, her friends she had known since teenage years, who left one day in 1940 to join the army, laughing as they waved goodbye at the station, yet disappeared out of her life forever, and about whom until the end of her life she could not speak without weeping.
I will never forget all the BBC’s reports from Wootton Bassett in Wiltshire, a town not far from where I live, where for many years the RAF repatriated the British soldiers killed in action and where every single time the populace would spontaneously line the roads to pay their last respects as the soldiers who had perished were driven by, and which would reduce me to tears every time.  Although the location for this repatriation has now been changed, the Royal Family have recognised the loyalty of the town and re-named it Royal Wootton Bassett.
I will never forget that it is thanks to them and people like them that we continue to live in a free world, and I will always be grateful.
-oOo-
Photo Finish -
from Lonicera's non-digital archive 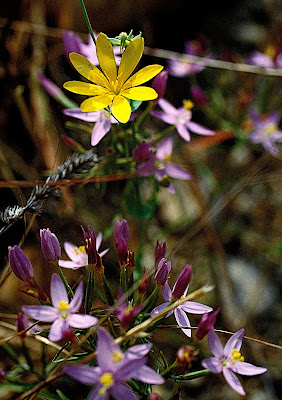 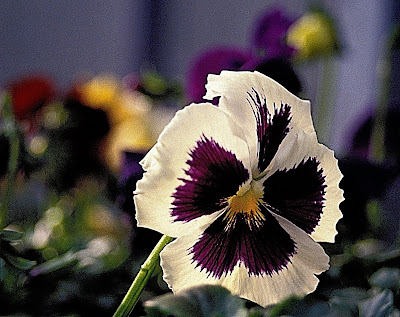 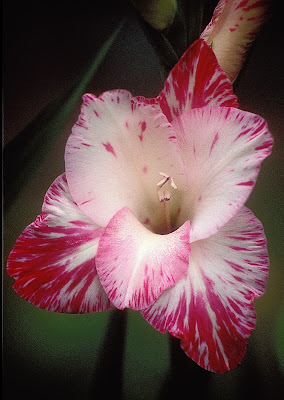 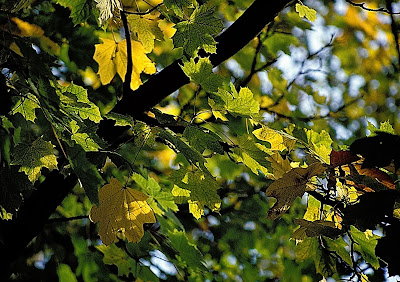 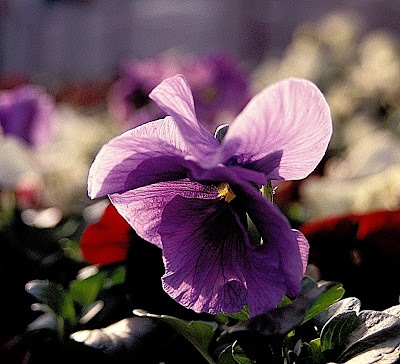 Although writing is virtually the most important thing in the world to me these days, and I have stories queuing up waiting to be told, I’ve slowed down a bit.  The next story in the pipeline is the unusual tale of Clorinda Sarracán, an Argentine woman who may or may not have murdered her husband in 1856.  But it’s taking me longer than it used to some months back, as did the research and writing up of “A Foreign Field”, the World War I story I told you a couple of weeks ago.
The reason is because I’m not getting enough sleep.  These days when I get home I don’t always have the energy to spread my books about me and select the lined notebook, fountain pen and ink colour of my liking (the planning stage) or sit at the computer and tap out the story and hunt for pictures (the final stage).  Recently I have been known to get home at 6 p.m. and sleep for 2 hours, then cook dinner, or sit with John watching something on TV and fall asleep in the chair.   I’ve only got to see an advertisement for beds or a scene in a film with someone’s plush bedroom with plumped up pillows and bedclothes folded back, and I’m fantasizing about being there, inside the telly… and zonk, I’ve nodded off.
Fridays are happy happy evenings because I’m going to have 2 days when I can let rip and sleep for as long as I want.  On Fridays and Saturdays I’ve been known to sleep for 9-11 hours, and even have siestas in between.  Invitations or suggestions which involve rising before 11 a.m. on weekends make me feel murderous, likewise weekday evenings which mean I go to bed later than usual – not because I’m home late (if you’re British and middle-aged you’re home by 10.30…), but because after the adrenalin rush of being out with friends I need time to wind down and get sleepy.
Part of the reason is that there are times when I’m less in control of my diabetes than I should be.  If for example I’ve had more sugary or oily foods than usual over a couple of days, the normal insulin doses aren’t sufficient, and I’m always scared of giving myself too much insulin, so I wait a bit.  If I overdo the insulin I could lower my glucose levels too much and bring on a hypoglycaemic event, when I feel I’m under water and can’t move without a great effort of will, which scares the hell out of me.  It takes a few days to catch up because I increase the insulin gradually and bring the glucose back down again – the process of several days.  In the meantime, high levels of glucose in the blood make me feel very tired and sleepy.
The second reason is that I have to rise at 6.30 a.m. for work.  I’m 58, and throughout my working life have never had to rise before 7.15.  This agony has been going on for about 18 months now, because the hospital where I work is being re-built around us (see my irritable report on "How I earn my Crust", Part 2, here) and the parking areas have gradually taken on the characteristics of an African waterhole, which gradually dries up in the summer and the animals fight each other for the right to drink.  (Not a fair comparison, but you know what I mean).

A multi-storey car park has been built, but employees are only permitted to park on two floors out of 5, consequently unless you’re actually parked by 8 a.m. (or earlier if possible) you won’t get in.  People do come in later, because they’re more relaxed about cruising around for 20 minutes looking at all the mini car parks around to see if there are any spaces left, and if they can’t find any then they don’t mind driving slowly up and down the main road looking for a space, then walking for half an hour to get to their desks.  But I get anxious and force myself to be in the car park by 8 (and still worry about it).  In these 18 months I’ve changed departments, from urology to orthopaedics, and people in both places have been as understanding and supportive as they can be – no pressure there at all as to my starting time.  But I still need to park, since I’m not near enough to cycle to work.
I suppose the main reason my tiredness levels have accumulated over the months is that I’m a night owl.  I’ve never worried about working late, staying up late, and I don’t consider myself to be lazy (except, ahem, where exercise is concerned).  I may be half asleep during the day, but from 7 p.m. onwards I’m on fire, inspired to write, full of curiosity and Google-searching, impatient when John understandably wants dinner and to go to bed at a reasonable hour, keen to reply to e-mails from people I haven’t written to for a while, read blogs, leave comments, in between playing the odd computer card game…  Suddenly it’s 11 p.m. and I’m nowhere near finished, but I know I need a proper night’s sleep.
In addition the ritual of putting the cats to bed can take an age, because we like them to be indoors after dark (mainly because of foxes and a bully tomcat which patrols at night) and we alarm the front of the house.  There are evenings when they’re feeling mischievous and lead me a merry dance down our road, as I call out in babycat language to entice them in, and wonder what the neighbours think as they hear me.
We’ve tried to bring the whole process forward but it’s so difficult.  We’ve only managed to gain half an hour…
But I must try.  When I’m writing I’m way up in the air cruising on a thermal, detached from everything below, loving the breeze in my hair, my fingers flying across the keys as I live and breathe what I’m writing about.  I’m up on high, somewhere else.  So I must control the diabetes properly, get enough sleep and put aside being a night owl for the day I retire.
-oOo-
Photo Finish -
from Lonicera's non-digital archive
St Ives, Cornwall
and Bonfire Night 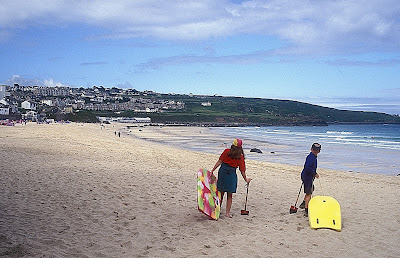 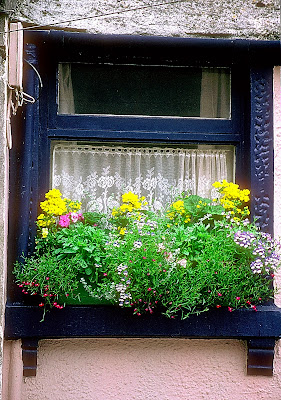 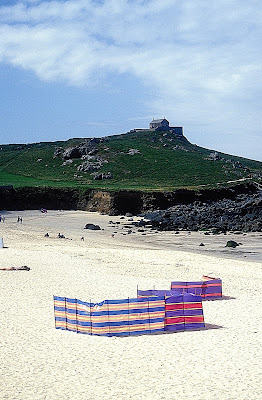 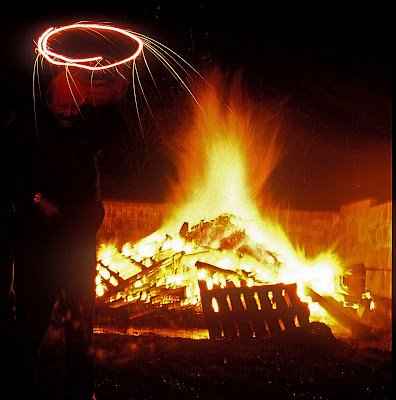 Look carefully - I only noticed it when I uploaded the picture -
that's John in the shadows front left holding the sparkler... 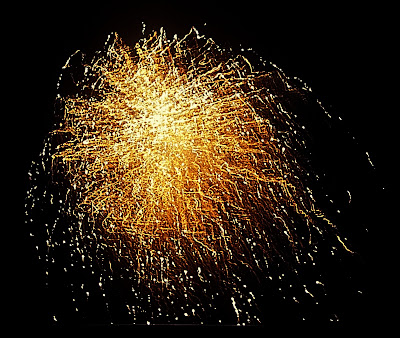 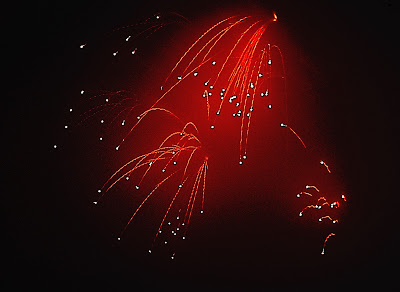