Memories of the past, dreams for the future. Part 2 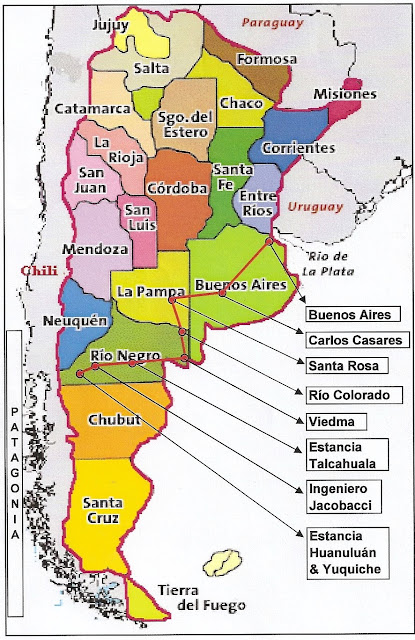 Argentina:  places mentioned in these posts
On a fresh spring morning in early November, Michèle and I set forth in a westerly direction from Carlos Casares, the village 260 km south west of Buenos Aires where she lives, on a four hour drive to Santa Rosa, provincial capital of La Pampa, where a friend was to meet and drive me the remainder of the journey to Río Colorado – a further 280 km, or three hours.  The few days in had been exciting and nostalgic, and I tried not to think about the unaccustomed quantities of food I had consumed.
However, the distractions were powerful:  driving with Michèle at the wheel is a unique experience, replete with an excitement all its own.  She leads a very busy life as a farmer’s wife and devoted mother of five children aged between thirty and fourteen, and still manages to fit in garden design and run several households.  Her husband, two daughters and three sons keep in touch by texting or talking to her on her mobile several times a day, as do contractors, fitters, workmen and various members of staff.  There were 8 tolls along the way, and I saw the greatest example of multitasking I’m ever likely to come across. 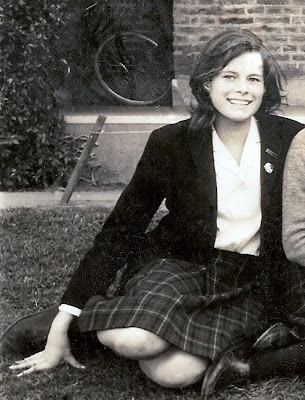 Michèle aged 13
She took calls and read texts, organised meals remotely, negotiated toll booths and supplied the right change, chatted animatedly to me as she puffed on a cigarette, balancing on the dashboard one of the medialunas we had bought at the last service station, deftly manoeuvring the steering wheel with an elbow when necessary, and taking sips from the cup of hot coffee in the cubbyhole by the handbrake.  Her capacious handbag was reluctantly relinquished by her to avoid being surgically removed from her lap by me, as I watched her, alternately laughing in disbelief and reflecting that though all of this was thoroughly illegal in , we were now in the Wild West in road terms. 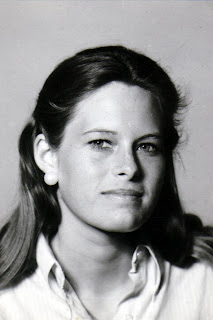 Aged 18
We have known each other since we were thirteen and at the same school, and we’ve always been buddies.  It was fun, albeit death-defying, to be part of her world for a while. 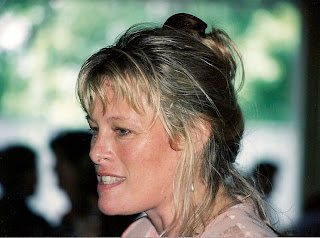 Aged 40
Friendship between women – what makes it so special?  History shared, mutual respect, a common approach to life, a special indefinable affinity?  Definitely, but male friendships have that too.  How about the reassurance of being yourself, even at your worst, and being able to share clinical issues without self-consciousness, not to mention the pure delight of shared weaknesses? … or just the ability to giggle like idiots and set each other off?  Perhaps a combination of all these things.  There are many bonds between us, not least that I’m privileged to be godmother to her older daughter. 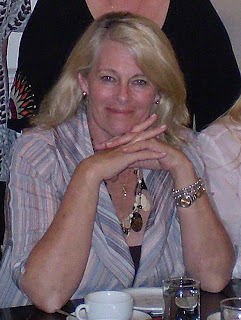 Today
-oOo-
Río is an attractive town by the slow, deep flowing river of the same name... 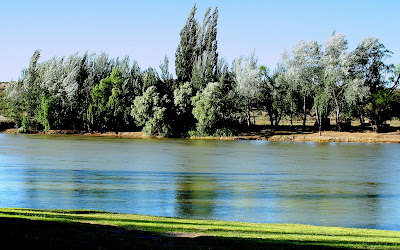 ...with tree-lined streets and, typically for , the entire network of cables required for everyday life hovering overhead... 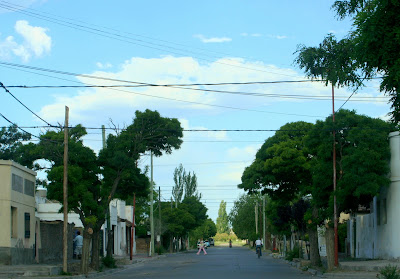 ...as you can see from the picture below of the prolifically flowering ceibo (the cockspur coral tree, or Erythrina crysta-galli, national flower of and ). 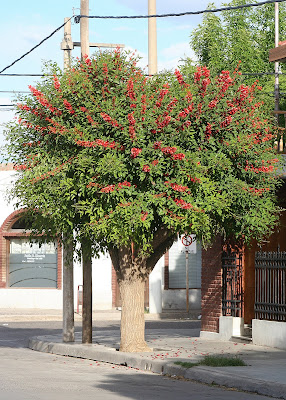 The following morning was another early start, with a journey 300 km south east to Viedma, the provincial capital of Río Negro.   No matter where you are in , whether city or steppe, you’re always aware of the wind, which tears fiendishly round corners trying to lift you off your feet.  The silence and solitude are for earlier in the year - in winter and spring you can still enjoy the solitude, but it’s nearly always noisy, the wind screaming across the vast open spaces and clattering relentlessly through the houses by day and night.  Photography is one of my passions, though I make no claims of artistry or expertise, and here I tried to capture… well, dust.

Hope you haven't drifted off...  Next time I'll write about Viedma.
-oOo-
Go to Part 3
Return to most recent post

Lovely reading your post.....I can honestly say that I never want your posts to end....you write beautifully and the whole story is absolutely fascinating. Your blogposts always really stick in my mind, I have truly enjoyed following your journey, in many ways, this year.

Your friend Michele is beautiful isn't she, how lovely to have a friend that you have known for so long....I don't have that due to moving etc. I loved your description of her in the car...it made me smile and I could totally picture it!

I also caught up on your previous post (not sure how I missed that, sorry)....the one about the "food"....oh yum....I know I shouldn't say that!

Your post made me think of two very good family friends who live in NYC....he is a high-flying banker who has travelled to South America many many times over many years, as well as travelling worldwide, and he always says if he could live anywhere in the world it would be Buenos Aires. His wife was born in Montevideo, Uruguay - and she introduced me to dulce de leche....WOW!!! I will say no more :)

Finally, congratulations on your weight loss since you have been back....FABULOUS....well done you!!

Merry Christmas and best wishes to you,
Simone :)

PS Can't wait for the next post, don't leave it too long!!

Fantastic post Caroline - you bring it all to life - I just love reading all about your journey. Hope you have a wonderful Christmas Zxx

Thank you! I don't deserve such nice remarks.

Simone, have you tried dulce de leche sandwiched liberally between meringue shells; scooped up with banana or a chocolate bourbon; used as a filling for sponge cake; or used to fill brandy snaps (only just before serving or they go soggy)????

Sigh, I must STOP thinking down these lines, I know... Shut up Caroline.

its great to have you back Caroline! this post was wonderful and I totally smelled, felt the wind and got the dust...I love dust in the wind. I spent many years in the high deserts of Washington and Oregon...those road pictures look so familiar!

I am new to your blog, which I found you through someone else's blog I am reading.

Your journey sounds fascinating & you write so well. I can actually visualize everything as your descriptions are fantastic!

I will be following your journey from now on. My name is Debi & my blog is:
www.HawaiiBoundBandster.blogspot.com

As always, a lovely post. Making me think that I need to travel.

Like the others...I LOVE reading your posts Caroline!! I feel I know your friend and could picture her in the car ..you write so, so well and I love reading anything you do:)
I just wanted to wish you a very merry and safe Christmas xx

Thank you for the well wishes.

I hope you have a fantastic Christmas too!!

Thank you all. Hope you're having a lovely Crimble - go easy on the brandy butter!!
Caroline

Caroline!! I've finally read this....years after you coming down to Carlos Casares. When, when, when will you be coming again???? To laugh together, to chat, to share, to listen, to care. You make me feel so special, when I am not. Just a human being who has been lucky in having a friend like you. First time I saw you? First day at St.Andrew's. I knew not one girl. Saw you standing before going into classes and felt: Hey, there you are...MY dear friend! Like if I'd known you from before. This feeling was felt once again and that was when I first say Micky, my husband.

Caroline !!! Just read to Selina what you wrote about this mum. She got such giggles !!! Típico, she said. Tal cual!!! Pero claro, it's YOU that makes it sound thrilling.... Beso!

Thrilling? I was shitting myself, convinced we were heading for destruction. If I could I would have fed you with the medialuna and given you sips of coffee with one hand while holding your mobile to your ear with the other as I steadied myself with my right foot against the door of the car. Snatching your handbag from you was the only thing I could do...
(What I SHOULD have done of course is to take photographs as evidence, since only your children know you well enough to know I'm not exaggerating!)
XXC