Tales from Elsewhere - The Birthday Present

When Clare and Paul moved into a gracious and leafy neighbourhood in Bristol they felt they had 'arrived', and things got even better when they met their next door neighbours Sue and Dan. Not that they became best buddies straight away or anything, but Clare certainly hit it off with Sue, particularly when they found that they celebrated their birthdays the same day.

As the day drew nearer, Clare confided in Sue how she had been hoping to get a brand new Peugeot 206 for her birthday. She had had one previous car, an old rattletrap which gave up the ghost the year before, since when she had had to rely on public transport and Paul on weekends. They could now afford it, she thought.

Sue was all solicitude and complicity. Over numerous cups of coffee they planned the campaign on how to plant the idea in Paul's head in a subliminal manner so that he would think it was his own idea. So far she had been congratulating herself on the subtlety of her approach. She would consult with Sue on the right technique - what to say, what not to say. Sue obligingly would try out the carefully crafted 'spontaneous conversations' on Dan and come back to tell her how he reacted. This was Sue's idea. A generous friend, she told Clare that she thought nothing of being used as a practice ground.

On the night before her birthday Clare got up in the middle of the night to answer nature's call, and to her speechless delight she saw through the window a beautiful brand new Peugeot 206 parked in the drive, sparkling red in the moontlight. Not to spoil his surprise she said nothing about it and went back to bed, thereafter unable to sleep thinking about the places she would go with her new car.

The following morning she was a little disappointed that he hadn't presented it to her by the time they sat down to breakfast, but recognised his cunning in presenting her with a lovely birthday card and a generous Marks & Spencer voucher. She smiled to herself as she guessed that he was trying to throw her off the scent. Not bad, she thought.

The drive was partly visible through the kitchen window, and she suddenly noticed their next door neighbours Dan and Sue getting into 'her' car and driving away, and her coffee cup came down with a clatter.

"They're taking the car away! Look!" she screamed, scraping back her chair.
.
"Don't worry love, it's alright" her husband replied from behind his newspaper. "I forgot to tell you that Dan was surprising Sue with a new car for her birthday today, and to help cover up the whole thing I told him he could park it here." He lowered his newspaper "I've just remembered you both have birthdays the same day - what a coincidence!"
.
Their friendship was never quite the same after that.

This week - a bit of Photoshopping

Next week I am getting an early birthday present from John:  he is paying for me to have a 4-hour tutorial session on my own with a Photoshop Elements tutor﻿.  It's something I've been dying to do for some years now, ever since I bought myself a machine which can scan the thousands of slides I've taken over the last 15 years with my Canon EOS100 SLR camera.  Since going digital I've wanted to experiment a lot more but there's only so much I've been able to teach myself.

I thought I would show you some examples of what I've taught myself on Photoshop - and I hope as from next week I shall be much better at it. 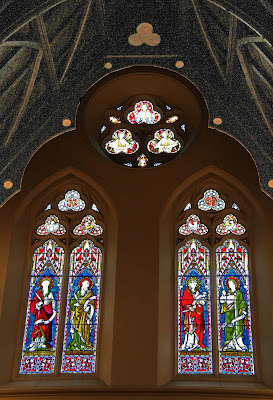 In a church there is too much contrast in lighting - the interior is dark, the stained glass windows are burnt out, so I've tried to redress the balance by bringing out the black ceiling, and particularly rewarding, putting the colours back into the stained glass. 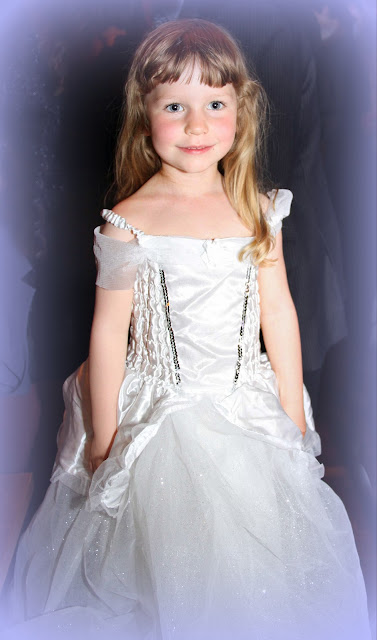 This gorgeous little girl was a bridesmaid at a wedding I went to recently, and I was trying to cut out the busy background full of people drinking and dancing.  I blurred some of it and in the end opted for a smokey blue surround to make her look a bit like a princess in a fairytale. 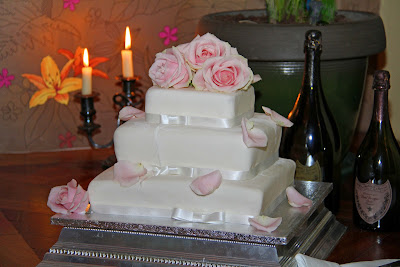 The cake was set up by the venue organisers, and I wanted to try making an image which didn't contain the two champagne bottles.  So this is the 'before'... 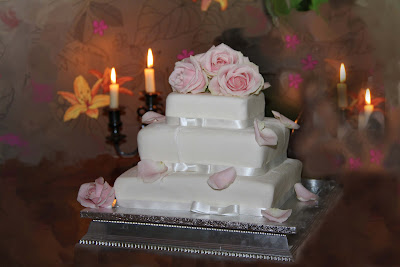 ...and this is the 'after'.  I sort of ghosted the candles over to the other side.  No doubt from next week I'll be able to make a much better job of it. 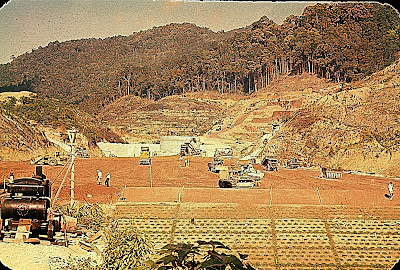 John took this picture in the late fifties when he was living in Penang, Malaysia, and it represents the early stages of the construction of a dam.  I tried to turn it into a more normal looking picture. 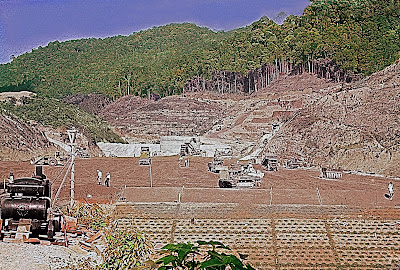 The sky was the obvious section to change, and the greenery had to be brought back to green.  The plant in the foreground and the other one to the left of it had to be coloured practically one pixel at a time.  I'm sure experience will teach me there's a much easier way to do it... 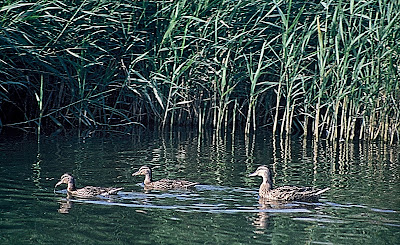 Taken by me in the nineties, a series of duck pictures which were very underexposed, and it's only thanks to Photoshop that I've been able to see them at all (I'm amazed and grateful that I was too lazy to throw away all the slides which weren't good enough...)  This one doesn't respond well to enlarging though - too much grain.

These last three are digital, taken with my new camera: 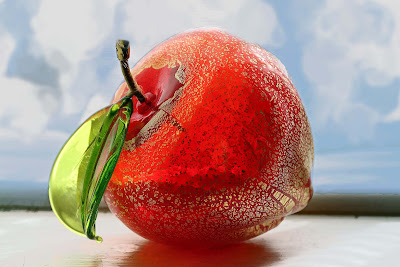 A glass ornament resting on my window sill, and with some experimentation I changed the grey day to blue, and the net curtains in the background into clouds - I need practice at that, because skies are the biggest problem for a photographer in the UK - they're always grey or white, and fluffy clouds don't come to order. 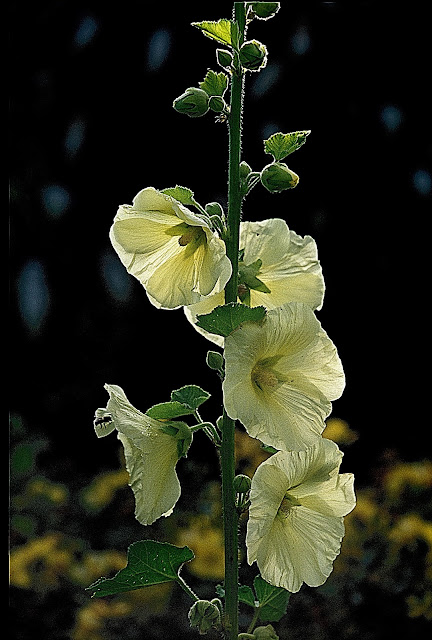 Not changed - I think I chopped off the top when I was taking it because the flowers had died off and didn't look so good. 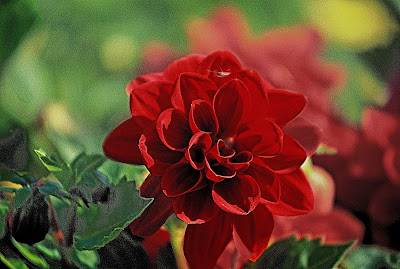 I'm a sucker for rich reds.  All I've done here is lighten the bottom left corner to bring up the leaves a bit. 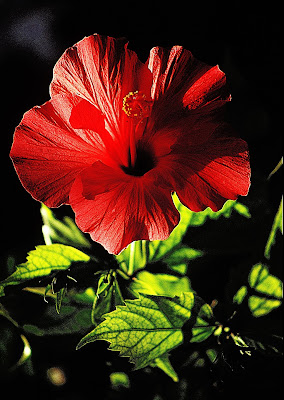 Taken in the Canary Islands 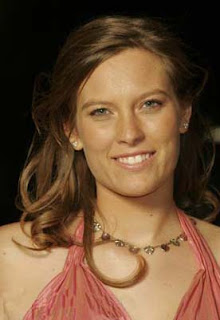 Selina – Recovering from her road accident last October:  I have mentioned her twice on this blog, here and here.  She is still at the rehabilitation centre in Buenos Aires, with her mother (my friend Michèle) in attendance 24 hours a day.  She is in a minimally conscious state responding correctly to questions using a thumbs up or down procedure, showing signs of affection towards her family and strengthening her muscles through exercise, though she is as yet unable to stand unaided or speak.  There are small weekly advances and her team is pleased with her progress; it’s not yet known how long she will be in the rehabilitation centre.
A further complication has arisen which has made day to day living stressful – the centre insisted that there must be two patients to a room, and a patient and her mother duly moved in to share a 7 x 3.5 metre space, with a flimsy curtain down the middle.  Four women therefore live and breathe in that room 24 hours a day, with no privacy except in the bathroom, and no more peace and quiet.  This would be half way to bearable if they each respected the other’s space or got on well, but the other mother believes her daughter needs constant noise and activity, so the television is on loud during waking hours.  Little respect is shown for Selina’s tracheotomy, which requires high levels of hygiene, their belongings get ‘borrowed’ and the untidiness is such that my friend started out tidying up after her but has since changed tack and got fierce about these three issues, which is very contrary to her nature.  The organisation offers no advice, help or recourse, and neither anger nor persuasion has worked.
That’s it for today, and once again may I thank you for reading my blog, whoever and wherever you are.
-oOo-
Photo Finish

The remains of the wreck of the Júcar, on the Western coast of Fuerteventura, Canary islands 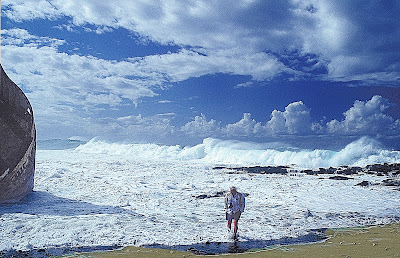 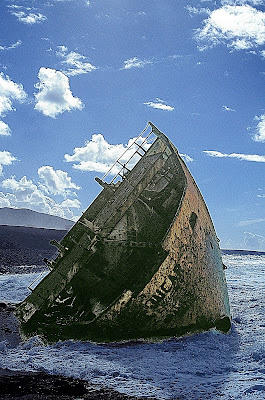 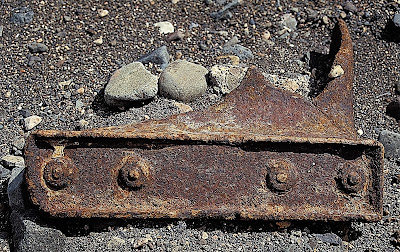 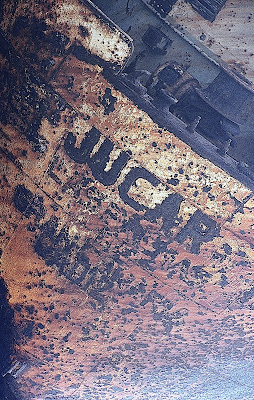 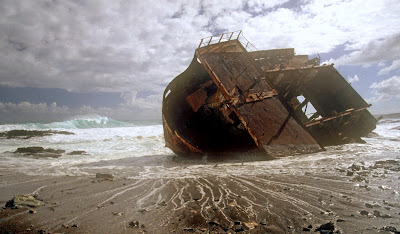