Lindsay at Suburban Turmoil (in my Favourites) is a very entertaining writer from Nashville, Tennessee, and a couple of weeks ago she came up with a novel idea.  The Bucket List – named after the 2007 film - as she puts it “generally contains 50 or so things to do before you die” – but instead she has preferred to list things she’s done which she’s proud of, or have made her happy, and called it the Bucket List Reversed.
So here is mine, in more or less chronological order.  Some of the entries are the type of achievements we all feel proud about, others I know with hindsight to have been milestones, some I’m grateful for and some have taken me by surprise or they’ve chanced upon my life at the right time.   I’m still amazed by them, even as I read what I’ve written.
As you would expect of me, I’m not the soul of brevity, plus I love illustrating entries where I can – for which I have trawled through box after box of my mother’s pictures, hence the delay in getting this first post written, and the reason why it will stretch over several posts.  It seemed to me to be an opportunity to share experiences which will otherwise be lost forever.
1.  First trips abroad
At eight I travelled ‘abroad’ (from Argentina) for the first time, and flew on a plane.  ‘Abroad’ was neighbouring country Uruguay, where I stayed with relations for the winter holidays in July 1961.  When the plane took off for the very short journey, I was open-mouthed to see the houses below turn into little toys. 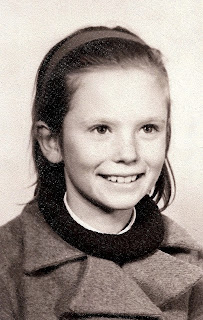 First official mugshot taken for documents.
I was told to be serious but I just couldn't,
it was all too exciting.
. 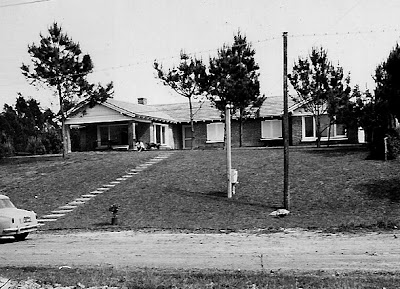 "Glenrest", near Punta del Este, Uruguay, where we spent
the winter holidays in 1961.
While staying there I took a (crystal) glass of water to the room I shared with my mother and inadvertently broke it.  Being scared of the rather formidable hostess and frightened of the consequences, I hid the evidence under my bed.  My mother found it of course, was very cross with me and made me own up straight away.  Being found out was embarrassing, owning up to it was humilliating, but it was a lesson I never forgot, and I have never been able to conceal mistakes of any kind since, even when it has been evident that no one would know or even be interested.
.
In 1965 my parents and I drove west across Argentina to Chile’s capital Santiago, to collect my sister who was staying with one of our uncles.  I was 11, and remember a lot about the journey crossing the Andes, which took my breath away. 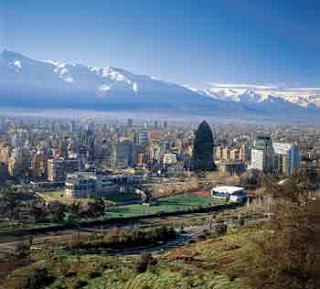 Santiago, Chile - picture from Google Images
Two years later at 13 my parents and I drove some 1600 km north into the hinterland of Brazil – to visit another uncle on a farm which bred the King Ranch Santa Gertrudis cattle – and now I really felt I was ‘abroad’, complete with foreign language, rainforest, intoxicating tropical flowers and fruit I had never come across before, not to mention the snakes measuring a metre long and about 10cm in width which sunned themselves on the roads.  It was all incredibly exciting.  (These two journeys were recorded on film by my father, but with slides, and I'm afraid I can't find them anywhere.) 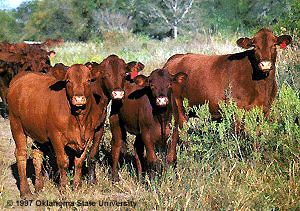 Taken from the website of Fazenda Bartira, where my uncle worked.
These are Santa Gertrudis cattle, a zebu/shorthorn cross
2.  The guitar
Learning to play the guitar at 10 not only gave me a great deal of pleasure, but it was also a way to overcome extreme shyness, gain acceptance among my peers, and demonstrate that I didn’t stutter when I sang.  It was the very first thing I ever did that I was proud of, and as I was growing up, every time I felt so shy that I could hardly speak, I used to say inwardly “but I can play the guitar, and they can’t.”  The raw and later calloused fingertips on my left hand were a badge worn with great pride. 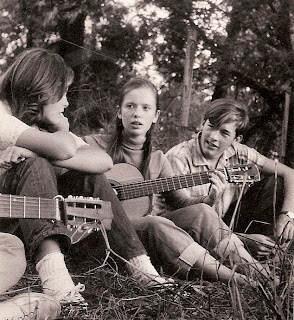 1968, with Michèle to my right (you've seen plenty of pictures of her in this blog), and her brother Marc, my first ever boyfriend, to my left. 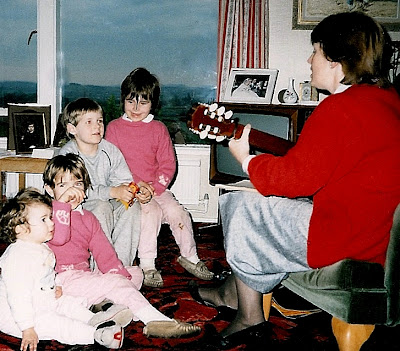 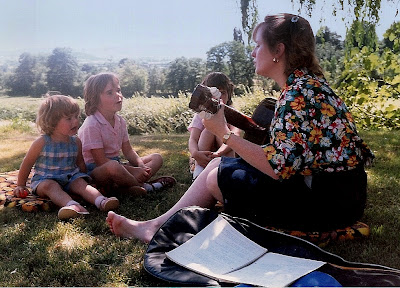 3.  Estancia "El Chorro", Córdoba, Argentina
“El Chorro”, an estancia belonging to relatives, where I spent all my childhood holidays up to my teenage years.    A wild and unspoiled location with corners of pure enchantment and occasional danger, I explored it on horseback with my cousins and swam everywhere it was possible to do so.  And now when I need to escape from the stress and the noise around me, this is to where my thoughts turn.  I would like my ashes to be tossed into the little stream there one day, to join the flow heading down to join the wider river many miles away.
These pictures were taken by me on a little instamatic camera in the late 80's before I became interested in photography - I raced round the old haunts, keen to capture my 1960's and early 70's memories on film, and sadly they were not taken with the same care that I acquired later when it became a hobby. 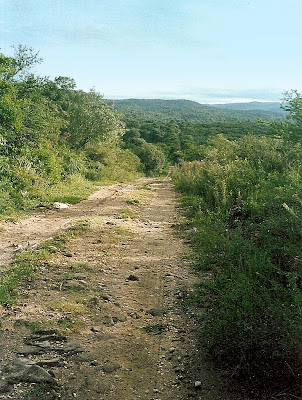 Approach road
This was the exciting beginning to the holiday - the ﻿slow, bumpy drive to the house, fording the same stream fourteen times, each number chanted by everybody in the car together... 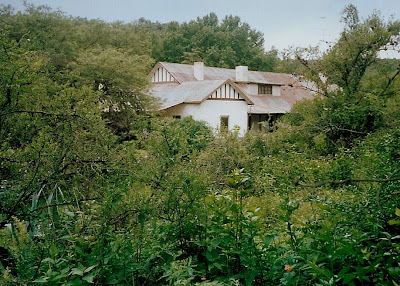 The first glimpse of the estancia house in Edwardian colonial style... 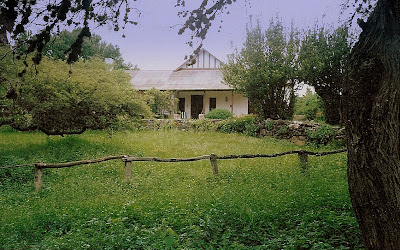 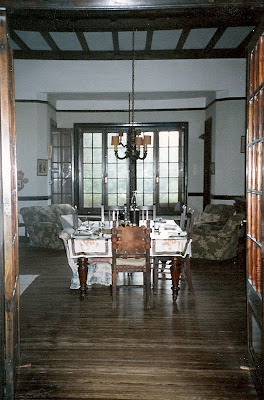 The dining-room, with the window at the end... 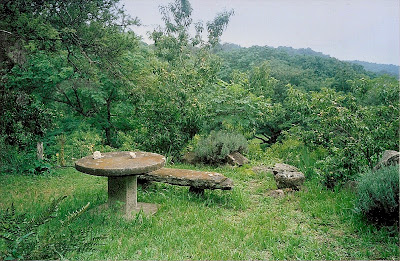 ...from where you could see this little promontory, a blissful place to sit in the evenings.  It overlooks a steep bank which leads down to the stream.  Over the years people have eaten the sweet, juicy, green fleshed peaches of the area and tossed the stones down the bank, and consequently there are are peach trees up and down that section of stream.  The horses loved them and would try to scramble up the bank to get at them, sometimes reaching for their snack at such impossible angles that it made you gasp just to look at them. 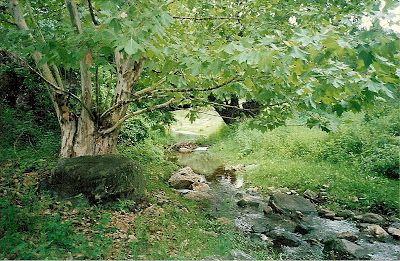 This, a very special place - the stream flowing all around the property.  This stretch is quite near the house, and it is where my cousins and I sought shade, paddled and chatted on sultry afternoons while the grownups had their siestas.  The large, smooth topped rock on the left at the foot of the plane tree was the favourite seat - first come first served.  In later years it was the place to go if you wanted to be alone to think.  You see the water washing over large stones; I know by heart the shape of every one. 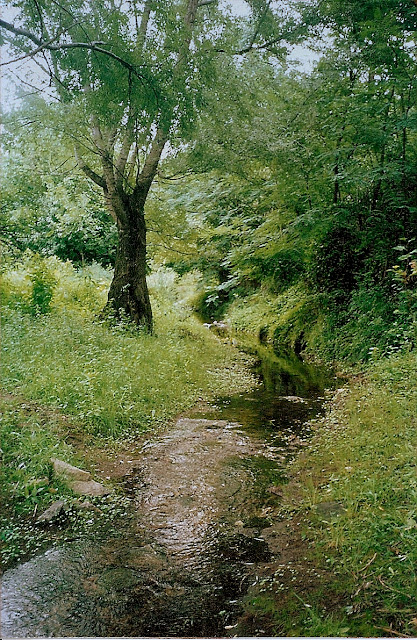 The stream has lost none of its enchantment.  I remember that one of the most magical experiences was to sit quietly by it and listen.  There's nothing quite like the gurgling sound of a stream, particularly under the bridge, where the sound was magnified.  Sometimes you would also hear crickets ... and occasionally the dreaded rattle snake. 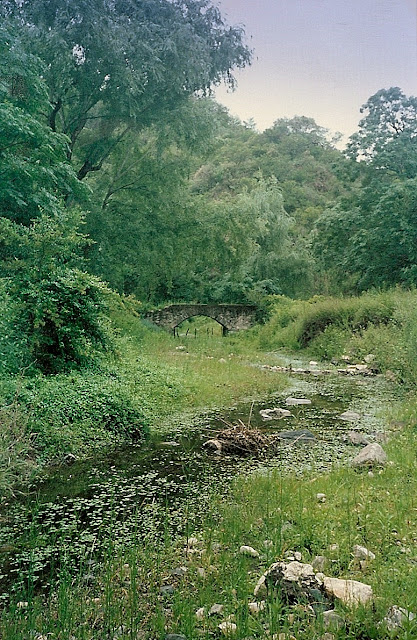 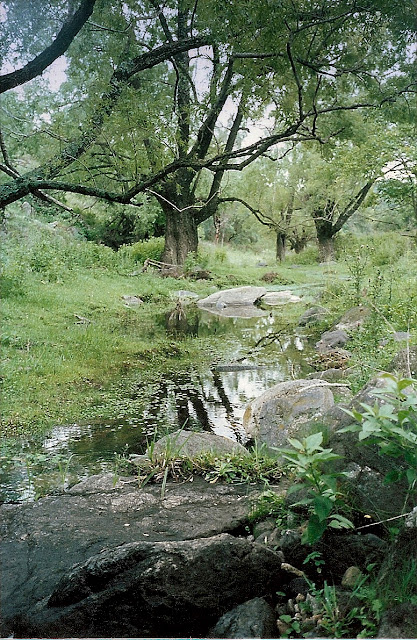 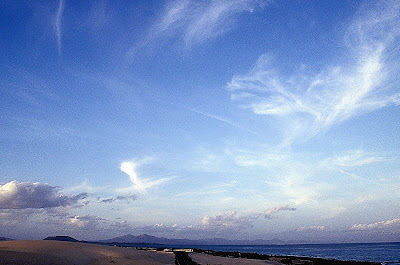 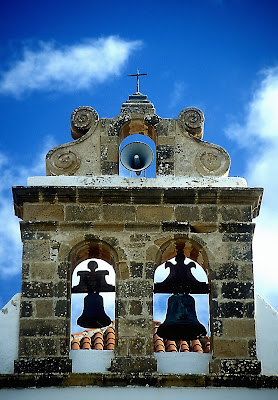 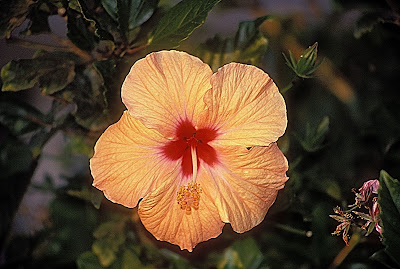 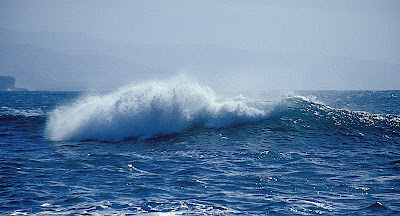 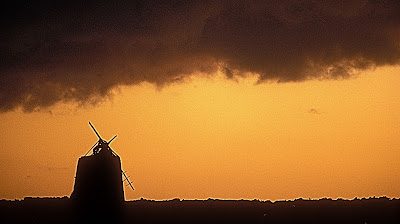 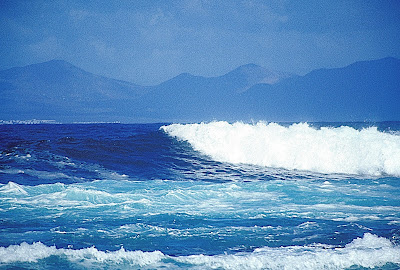 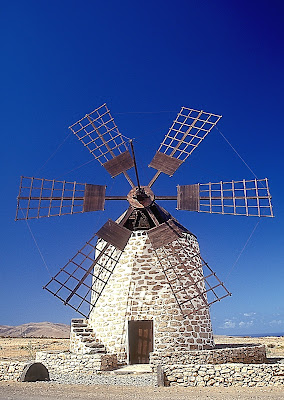 -oOo-
Go to Part 2
Return to most recent post

what? even your so called not-careful pictures are stupendous!! I quite like the idea of your bucket list.

I thoroughly enjoyed this post of yours Caroline, your memories and pictures - the last image of the windmill is absolutely stunning ...

I loved your first memory of how you'd broken the crystal glass and hidden it away - I've also been guilty of this type of behavior and have learned that the guilt of concealment is often worse than the punishment ...

Wish it had been my idea! The writer I got it from, Lindsay, is a journalist, and very professional, I enjoy her writing on the blog I follow. (She writes about fashion too, but I'm not as interested).
Thank you both for the kind comments.
Caroline

More lovely photos and memories. I especially love the place you call El Chorro and it's surrounding area. No wonder you loved it there.

I'm glad you've left a message - I couldn't find your blog when you became a follower. Now I've been able to enjoy having a look at it. I'm pleased you like El Chorro - it is very special to me.
Caroline

Your pictures are lovely. It is so good that you took them. I did not take any pictures of where I lived while growing up and I am so sorry now – I only have my memory and it is not that good.