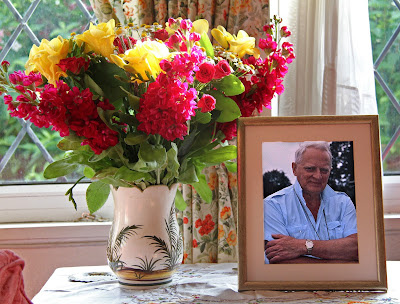 I was sitting on my back patio one evening a fortnight ago, looking out at the small garden which is very dry at the moment.  It had been a very hot day, with no rain for weeks – most unusual in this green and pleasant land.  My thoughts were far away but I suddenly became aware of two things – firstly that my two cats had quietly joined me and were sitting at my feet, and secondly that the scent of honeysuckle emanating from the hedge was so powerful that it had interrupted my reveries.  ‘That’s the lonicera’, I thought, ‘what a gorgeous perfume’…

From there it was just a step away from remembering that this is my blog name, and that I love my blog and don’t wish to abandon it.  Since then on several occasions I have sat at my computer looking at my last few entries, got bogged down and just stared into space.  But after several goes (when Freecell won), here I am, determined that I’m going to write a post.

Shortly I’ll be telling the story of Bell Ville, the village in Argentina where my grandmother and mother grew up, and have done all the research.  But first I would like to catch up with any readers I have left and who have been kind enough to ask me how I am.

It has been four and a half months since John died, and all I can think of to say is that I could never have envisaged how hard it would be.  I guessed at the crushing sadness I would feel, how much I would miss him, but didn’t realise how my mental state would dictate my behaviour.  I don’t want to go out, I don’t want to communicate, I can’t manage small talk, in fact I’d rather not talk at all.  I hate bright light; I hate noise and bustle, I crave silence although I can’t shake off the feeling that I’m screaming in a void and nobody can hear me, not even myself.

I don’t care much about myself either, and am very grateful to the happy few who help me keep the house clean, the garden under control, the cat litter changed and the light bulbs replaced.  Long, soothing showers help, and as many hours of sleep as I can manage.  At the very beginning when I went to bed at night I would think – stupidly – that perhaps I would not wake up, or if I did I would find it had all been a bad dream; then later that John would come to me in dreams and talk to me – he didn’t -, and latterly it has just been a form of escape.

Unfortunately it doesn’t stop there either.  Being the sort of person I am (this blog did after all start out as group therapy for living with the gastric band) I’m eating the wrong things, partly because I now have to do the washing up (!) and I can’t be bothered to cook properly except once in a while, and because certain foods give me pleasure to eat.  Don’t confuse this with comfort food.  Mash potato is comfort food.  Ice-cream is just pleasure, and very bad for my diabetes.  Merely giving myself a lot of insulin isn’t the answer, and I struggle to bring it under control.  I have to care; when I’m older and suffer the effects of my self-neglect I’ll certainly care, I’m sure.

I watch more television now than I have for years, staring at the screen and zapping backwards and forwards.  The British sitcoms are all old, I’ve seen them a million times – but Big Bang Theory is new to me, and it’s the only regular programme that makes me laugh.  It has also been good to see films from start to finish without interruptions, and Brokeback Mountain has been a wonderful discovery, joining the pantheon of my all-time greats such as The Shawshank Redemption and Silent Witness.

I read a lot too, mainly on my Asus Eeepad.  I’ve become absorbed in biographies of celebrities I was fascinated by as a teenager – Jackie Kennedy, Grace Kelly, Natalie Wood, Elizabeth Taylor, Queen Sofía of Spain - because it’s easy reading and I don’t have to work too hard.  Last Saturday I read for seven hours straight; it was wonderful to forget about the world for that long.

Sometimes I deliberately conjure up John’s more annoying habits, but give up when I find myself wishing there were around to irritate me again.  When I sold his car I cleaned it out before it was collected, and in the door pocket I found a small pack of cigarettes with 8 of the 10 gone, and a lighter.  He had stopped smoking in 1999, so I was now looking at an aspect of John I had missed completely.  No wonder he had insisted on continuing to drive right up until he went into hospital; it was the only place he could smoke without me to nag him, and it was hardly going to make any difference then to his lung cancer.  The fact that it was a small carton meant that it was occasional – there were indeed times when I said I smelled smoke on him, and he would reply indignantly that sometimes he found himself with smokers, and must he take the blame for them too?  Perhaps it was his only pleasure, like me and my ice-cream.

The cats are my companions, they stick to me like glue when I’m not at work, and when I’m clearly upset Banjo jumps onto the sofa, sits down beside me and puts a paw or two on my knee.  I have the proof every day that cats are not merely self-interested animals, and that they are capable of great affection.  I don’t know what I’d do without them.

Plenty of humans have helped me too, and I’m grateful.  For my 60th birthday in mid June my friend Michèle and her husband with her daughter and family came over from Argentina for a holiday and spent a few days with me, and my sister and brother-in-law joined me for the day when we all went out for a birthday lunch.  A couple of weeks’ later we gathered on the south coast at the home of an aunt who had recently lost her husband of nearly 70 years, and when my niece, her husband and His Gorgeousness my adorable great nephew aged 4 came along too, as well as my uncle, aunt and cousin from Guildford.  My sister made a beautiful birthday cake.  It was unexpectedly  comforting to be surrounded by relations who had known me for so long.

On the actual day of my birthday, Saturday 15th June, I had a houseful of people – seven of us altogether counting Michèle’s two grandchildren, when the doorbell rang and flowers were delivered.  I had to sit down when I read the card that came with them – Happy birthday Tich, from Humph.  I learned later from John’s daughter Jo that when she had been visiting him in hospital in February, he had asked her that in case he wasn’t around for my birthday, would she send me something nice from him, and she promised she would.  And here, almost three months to the day since his passing, was a beautiful bunch of flowers and a bottle of wine from him (see picture top of post).

My only thank you undelivered. 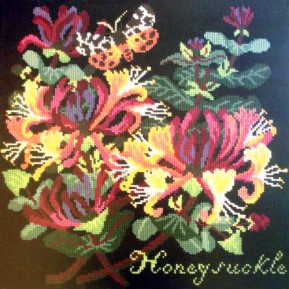