I leave home on Wednesday at midnight, John takes me to Heathrow for a 6 a.m. flight to Madrid and onwards to Buenos Aires, landing at 10 p.m. local time on Thursday, (1 a.m. bodyclock time), with a further hour and a half drive to where I'm going, a friend's house, then an early start on Friday to get several things done before my first presentation (see previous posts for explanation).  I'm tired just thinking about it!

I'm not complaining though - it's the most exciting thing I've done in years, and I've thrown myself into the preparation of the PowerPoint presentation which I'll be giving three or four times, practising it over and over (it's still 23 minutes though...).  I've also done a narrative to put on CD complete with pretty picture burned in with a machine we have at work, to make it look professional - and I've got a dozen copies to hand out.  If I don't find a publisher, it won't be for lack of trying - and not just by me, but the brilliant people at the other end who have helped me to organise it and put my best foot forward.

My bandit friends have helped me too.  It's the most wonderful form of therapy to pour out one's miseries and insecurities in cyber space; there's such a potentially massive audience out there, that there's always someone with whom it strikes a chord and who is willing to tell you so.  It's so appreciated when they do.

Back in August I wanted to lose at least 10 kg before I went to Argentina - and perhaps it was too ambitious, I've managed 6 - this morning I weighed 91, a total of 23 kg down from before banding.  The exercise has helped me feel fitter, and I feel well able to do a great deal more walking than I could a year ago, but it hasn't speeded up the weight loss.   I'm not whingeing, I realize this is not a bad result - it's back to the old torment of the slimmer:  patience, lack of.

We shouldn't weigh ourselves every day, but we can't resist, because sometimes our wellbeing for the rest of the day is set by the reading on those scales - and negatively too.  I'm despondent for hours when I've gone up because I dined late the night before, and on carbs, however modestly.  Wailing "it's not fair!" is childish, but it's so hard to keep it to yourself.  Those around you are sympathetic but too accustomed to hearing you say it...  You're having to live through yet another day of postponing your weightloss...

But you live through it, mostly by throwing yourself into an activity that isn't as self-centred as obsessing about weight loss, and the days pass, and eventually the scales relent.  It's a day to day struggle, and I read it over and over in other blogs - Bunny, Shaggs, Dawn, Tina, Roo, Carla, Bridget, Breanne and my bandit friend Cherith, who doesn't have a blog but communicates by e-mail.  All expressed differently (all interesting) but all trying to live with the screaming impatience caused by the incredible hope that the band brings to our lives.

In addition to all those mentioned above, the non-bandits are just as supportive and wonderful, in my case Helen and Simone who I know would make lifelong friends if I met them (all these blogs are listed on the right).

On Wednesday I'm going to Taunton to have an unfill, perhaps 1 or 1.5 ml.  This is deliberate, and I admit I feel uneasy about it.  I don't need it, but the next few weeks are going to see me eating as a guest at other people's houses or in restaurants with all the kind people who have helped me, or in restaurants on the road travelling around - in all these situations, where I'm going to need all my confidence anyway, I just can't risk food getting stuck, feeling ill and disappearing to the loo, returning with (in my case) a blotchy face and red rings under my eyes, which take up to 2 days to disappear (so Claudia Schiffer can relax).

I admit that for a little while I would also quite like to be able to eat Argentine steak, breaded schnitzels, known as milanesas, and empanadas (a garlicky, spicy minced beef pasty, often deep fried, and to die for).  I'm not planning to pig out on these things, I just want to be able to have a modest portion, and at the moment all these foods are totally out of the question.  But we don't learn good habits with the band - and if I'm too wide open I probably will eat too much, then wail about it when I get back...

This is the first slide of my presentation - 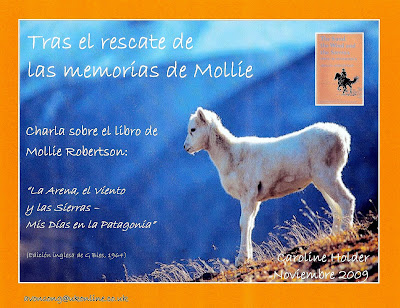 If I find cyber cafes I'll try and blog occasionally to say what I'm up to.  I return Sunday 22nd November.

See the picture of Aconcagua on the right? It's no longer a mountain in Argentina, it's the moon.
.
I was encouraged by having left the foothills behind and starting to climb the mountain proper, but somehow I keep missing my step and sliding back, with the scree clattering down around me, my hands scratched and my mouth full of dust.
.
I'm busily leaving comments on other blogs as if to say "I'm still here even if I haven't written a post", but the truth is I'm finding it such an uphill struggle at the moment that I'm only posting now because I recognise that if I embarked on blogging as a therapy to help myself, then I have to at least turn up for the sessions.
.
I know that the feeling of hanging on by my fingernails will pass, that it's just a question of patience in getting to the right adjustment of the band and listening to my body, of helping it along with 'wise choices'. Perhaps I've seen too many films, and come to believe that transformations happen in about an hour and half, or an hour and fifty minutes maximum.
.
What I needed was a lobotomy, not a gastric band. Tight restriction achieves NOTHING, because while your body is prepared to cooperate with "don't eat or you'll throw it back up", it's merely a declaration of war to your brain, which joins the battle against you. "Go on" it whispers in your ear - "there's still plenty you can eat...think how lovely it would be to actually feel full".
.
Tight restriction leaves you feeling too hungry, and your willpower - which always was a cowardly cur and got you into this mess in the first place - flees the scene and leaves you unprotected. Diabetics are trained to fight hard against confectionery temptations, but too much crunchy cereal (forget the milk, treat them as as if they were sweetish crisps...) has the same effect, not to mention having sweet biscuits around in the office.
.
Most fruit and vegetables, which you enjoy and are low calorie, are now a problem because you're too restricted, so to add insult to injury, you now have constipation to deal with in addition to the rest of the undignified process...
.
So out you come with your hidden weapon: exercise, lots of hateful, time-consuming activity of the I-could-be-doing-something-much-more-interesting-that-doesn't-hurt variety. Body then hits back with cramps, hypos, plus terrible stiffness in the back and hips every morning, and WEIGHT GAIN.
.
So I plod on, just putting one foot in front of the other and not looking up further than my shoes, knowing that somewhere ahead in the distant future, is the top of the mountain.
.
-oOo-
11 comments