Tales from Argentina - The Wallet

My mother once told this story which she had heard from a friend during the nineteen seventies in Buenos Aires, when the trade unions were all-powerful and could call workers out on strike with minimal notice.
As strike followed strike you never knew which aspect of your life would be disrupted next.  Should you stockpile toilet paper and basic groceries, or add to your collection of tinned foods?  Should you pump up your bicycle tyres to get you from A to B?  Or lay in stocks of candles for the inevitable blackout, and cook everything you had in the fridge just in case it went off?  Or if it was a general strike, you might as well stay home and read a book, that is after filling the bathtub and every big saucepan you had with water, in addition to all the above.
On this particular occasion it was a bus strike, and Roberto, a man in his thirties known to this friend of my mother’s, left for work in his car.  Some minutes later he saw an older man standing forlornly at a local bus stop; clearly he had been waiting for a long time in the hope that a bus would somehow miraculously appear.  Roberto stopped to tell him that he was wasting his time, and then on the spur of the moment, felt sorry for him and offered him a lift into town.
The man gratefully accepted, and got into the passenger seat.  He introduced himself as Marcos, and admitted that he was cold and stiff from waiting for so long.  He needed to head right into town, a long journey even by bus, and had been wondering what to do next.
They chatted amiably for a few minutes, then Roberto told him he was getting low on petrol, and if Marcos didn’t mind, he’d like to stop at the nearest petrol station.  They drew into the next one they saw, and as was the custom in these establishments in Buenos Aires, an attendant came to the driver’s window, took his order, filled the tank for him and told him how much he had to pay, without Roberto having had to leave his car.
In those days petrol could only be paid for in cash, so he reached over into the back seat to take his wallet out of his jacket and found that it was missing.  With a sickening feeling he realised that the older man must have helped himself while he was busy talking to the attendant and his attention had been distracted.
This was the era of danger and violence in Argentina, when the country was ruled by a military dictatorship and people disappeared from one day to the next with no explanations given.  For his own safety Roberto had always kept a small hand gun in the pocket of the driver’s door.  Without thinking twice, in a flash he pulled it out, pointed it at Marcos and hissed –
“Give me the wallet!”
Marcos hurriedly did as he was told.  “Now get out of my car!”
The man disappeared at a run, while the attendant looked on nervously from a distance.  Roberto put the gun back in the pocket, explained what had happened, paid for his petrol, flung the small change into a box in the car he kept for the purpose, and drove to work.
He was disgusted that his kindness had been repaid with this attempted theft, and was relieved that he had stopped for petrol and thus noticed that his wallet was missing before the passenger got out.
When he arrived at the office, Roberto parked his car and made his way up to his desk, where the telephone was ringing.  It was his wife, who was calling to let him know that he had left his wallet behind on the hall table at home.  Disbelieving, he pulled the wallet out of his jacket and it was only now that he realised that though very similar to his own, this was not his wallet.
He sat down at his desk feeling weak at the knees and examined the contents of the wallet.  It contained a significant amount of cash, and documents giving Marcos’ full name and – thankfully - home telephone number.
He rang the number straight away, and the woman who answered the phone told him that her husband was unable to take phone calls at the moment because he was in shock from a very disagreeable incident that had happened to him that morning.  He had been trying to go to the bank to deposit some savings not knowing the buses were on strike, when a man had offered him a lift and then robbed him.
The misunderstanding was eventually cleared up, and Roberto visited Marcos on the way back from the office to return the wallet plus the cost of the petrol and a big bunch of flowers for the wife, the money for which he had borrowed from an office colleague.
In fact they became firm friends, and as they lived close by, socialised regularly from then on, taking it in turns to tell the story to other guests of the day the bus strike had brought them together.
With thanks to Sylvia.
-oOo-
Photo Finish -
from Lonicera's digital archives
Home Sweet Home
Just for a change I thought it might be interesting
to show you pictures of my home - 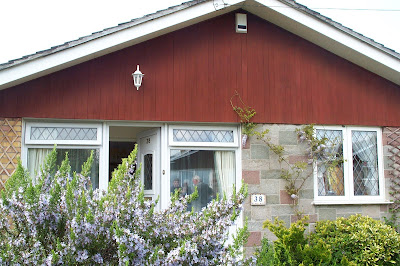 (Taken by Shane)
Front of the house 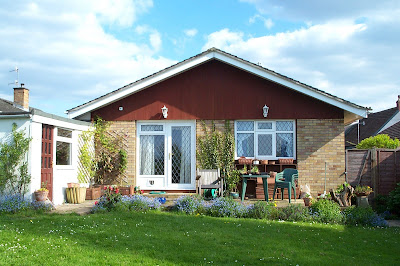 (Taken by Shane)
Back view, before we had the annexe built 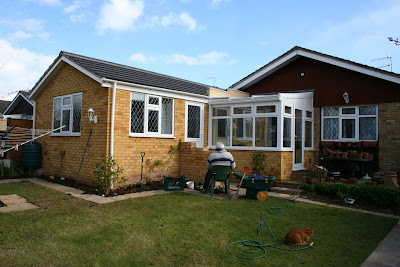 Back view, after the annexe was built.  John gardening 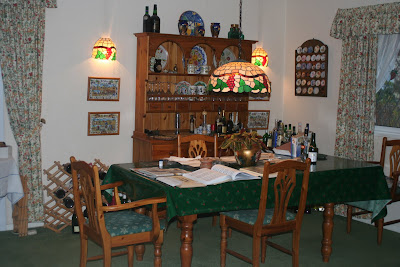 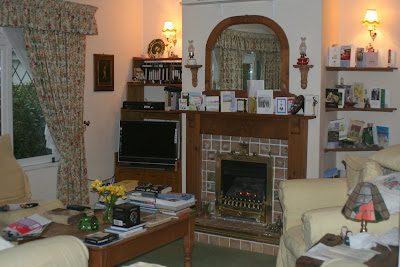 Sitting-room,  it must have been birthday-time 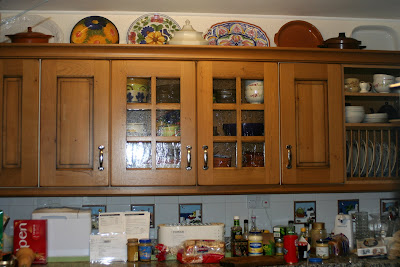 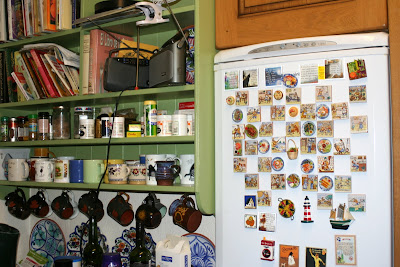 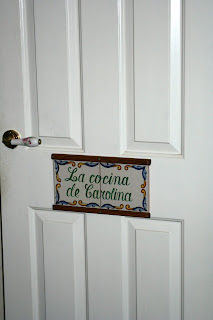 "Caroline's Kitchen"
My father had these tiles made in Valencia, Spain,
an area famous for its pottery.  British visitors are
apt to pronounce the second word "cochina",
as if for Italian, which gives it a whole
new meaning in Spanish
(Caroline The Pig...) 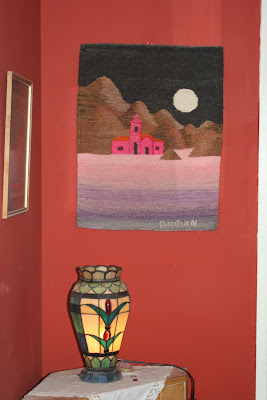 The walls in the corridor, not quite as bright as this.
This Tiffany style lamp, which I adore, is quite dim,
and is the only light left on in the evenings there,
so that it'll all glow pinky red.
The tapestry is a Guitian, from Argentina. 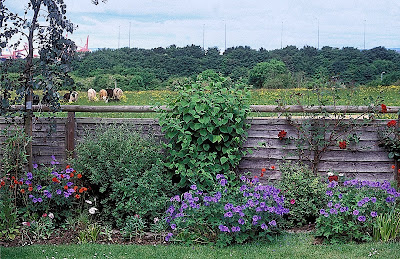 This is the view from the back garden, with cows in the field and the cranes of Portbury Dock in the background.  We've now planted hawthorns the other side of the fence which are quite high, so although we only see this view in winter, it does help protect us from the sounds of the motorway a mile away. 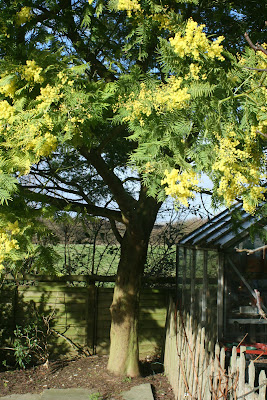 My beloved mimosa (wattle, aromo) which got killed off in the severe frosts last winter.  However there are lots of shoots which have sprung from the base, so I'm hoping it'll grow again.  It blooms in mid winter, and the perfume is incredibly sweet.
-oOo-

Hehe ... great story Caroline - yes, it's amazing what mistakes we make in the heat of the moment when we're not thinking clearly ... glad your story had a happy ending though ...

Thanks Graham... I'd forgotten this story completely, till my sister reminded me, and only then vaguely. I hope she remembers a few more!
Caroline

Great story and pictures!! You have a lovely home and yard. We have Mimosas here in Portland as well. Our old neighbor had one and the smell in early spring (February if I remember correctly) is luscious! I hope yours returns to health.

The mimosa looks like a growing bush at the moment, and John is full of gloom and doom about it (he's no fan, sadly) - he's convinced that one day it'll grow to crash down on the greenhouse. Well if it does I hope it makes a smashing job of it because I hate that old greenhouse, and would love to get a new one...
Caroline

What a story! How frightening for both of them for different reasons. Good thing they were able to clear up the misunderstanding and eventually becomes friends. Great story!

I enjoyed your photos too and see your lovely house. I esp. like your Mediterranean pottery and your tiffany lamps.

p.s. I hope you've found an acupuncturist. If I hadn't waited so long to seek help I'm sure I'd be better now.

Thanks Penny - I've felt better since my job has taken me walking all over the hospital, down endless corridors. I start a new job tomorrow, and I have no idea how much walking it involves, other than from the car park, which is twice as far as up to now (a good brisk 10 minute walk, so I'll wait to see how I get on.
Caroline

I'm very glad to hear your sciatic nerve is doing much better. I pray it continues so for you. Good luck too with the new job.