The Story of the Village of Bell Ville, Córdoba, Argentina (Part 1 of 7) 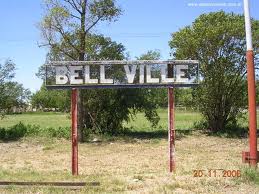 I’ve long wished to tell this story.  Bell Ville is not that different from many villages which grew into towns the length and breadth of the Americas, but I feel strongly that not many of their histories are recorded, and they deserve to be.  I’ve drawn extensively from a book written in the mid nineteenth century by Richard Seymour, an English pioneer farmer who spent only three years in (1865-8) but managed to pack a wealth of experience into that short time.  He lived between excitement and fear – excitement because he fell in love with the land and its climate; fear because he had not reckoned with the number of native indian incursions and the human, livestock and financial losses constantly sustained as a result.
The people to whom I refer as indians or natives are the original tribes of brutally wiped out almost completely in 1878-9, barely ten years after Richard Seymour had returned to .  Now we perceive them as wronged and cruelly treated, part of the population which was merely trying to survive in a world where being hunter gatherers had become an anachronism and threatened the lives and livelihoods of the rest, the agricultural society and the city dwellers. But at the time they were regarded as pests and standing in the way of progress. They were also unfortunate enough to inhabit some of the most fertile land on the continent.
The constant threat they posed was ignored for decades by a government far more concerned with sending soldiers to their war with than in using them to defend the indian frontiers at home.  The pioneer farmers felt abandoned to their fate, and many such as Richard Seymour opted to return to . 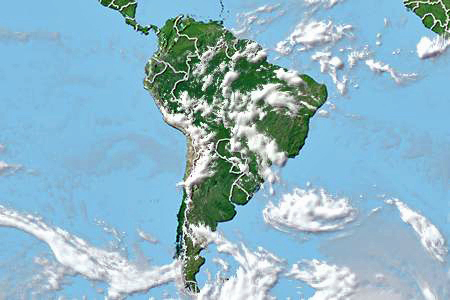 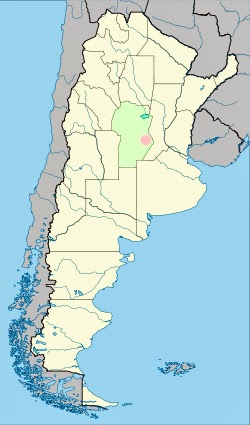 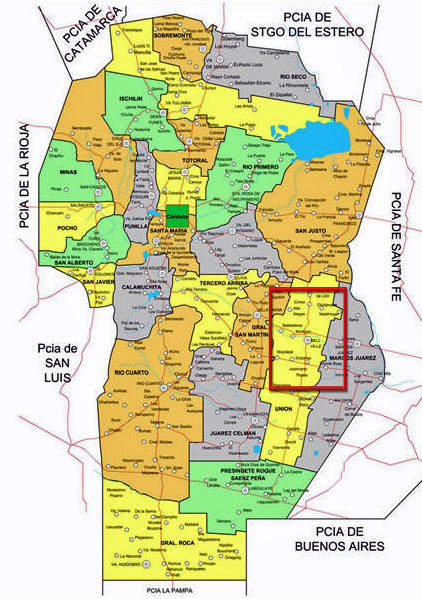 Province of Córdoba - Bell Ville is in the centre of the red square.

-oOo-
When it was called Fraile Muerto
During a hot summer in the early 1970’s my mother and I were travelling by car to visit relations in the province of Córdoba, Argentina, when on impulse she suggested we make a small detour to visit the village of Bell Ville, where she was born in 1922 and spent her early years.  Perhaps she could find the house – it had been at least forty years since she had last seen it.
In the seventies the village was identical to thousands of other rural villages – laid on a grid system with very wide streets lined with plane trees planted in specially dug square holes edged in concrete at equal intervals on the pavement, pruned to within an inch of their lives and trunks painted white up to the six foot mark, looking like survivors of an immemorial flood.  Overhead cables were lazily draped across the streets here and there, sagging in the middle and swaying when there was a breeze.  It was siesta time; the only life to be seen was the occasional dog scratching itself in a shady corner.  There was a very large plaza in the middle of the village, complete with mature trees, criss-crossed at right angles by tiled paths and at the intersection the inevitable equestrian statue positioned in the middle of a dry fountain.  During windy periods dust swirled round the village making doors slam and old windmills clank.
We found the house.  It was now a couturier’s shop, and although the ground floor had been opened up and most of the internal walls removed, the front door and entrance hall were, she said, exactly the same.  It made her misty eyed to remember the design of the old tiles on floor and walls up to waist height, not to mention the heavy wrought iron door with its glass panes.
I was about eighteen then, and from this distance in time very much regret that I had not yet become interested in photography.  Thus I have no record of that visit.
My mother used to tell us about Bell Ville, a proud little village where Anglo Saxon adventurers had arrived in the mid nineteenth century in search of good land to farm and from which they hoped to become rich by dint of hard work; and later where Italian immigrants had sought refuge from conflict and poverty at the turn of the century.  She was a descendant of both.

Back then, a century before she was born, there were also wanderers from the capital Buenos Aires seeking their fortunes, where failure in one village made them move on to the next; soldiers turned vagabonds and vice versa; and always in the background the original native hunter gatherer peoples (the Ranquel and Tehuelche tribes) who once had had the land to themselves and now regarded the settlers with hostility.  Indeed it was mutual.  No longer able to roam as before, there were easy pickings to be had from the farms, and the tribes regularly staged long distance cattle rustling incursions which included violence to their proprietors and workforces. 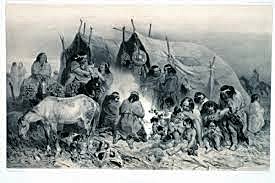 Bell Ville’s story is typical of small urban settlements all over the world which grew into towns, weaving struggle and triumph with tragedy, achievement with failure; farmers gambling with the weather and waiting for help from the central government of the day in the form of soldiers to protect them and laws to safeguard their livelihoods.  Lives were spent surviving from one day to the next with no time to record these efforts in any detail, and there are few contemporary accounts.  It is therefore up to us the descendants to piece it all together so that it is not forgotten.

I have tried to assemble what little there is to give readers a flavour of how the area evolved, but have concentrated on Bell Ville as it was, trusting that there is plenty of information in existence about the modern day town. 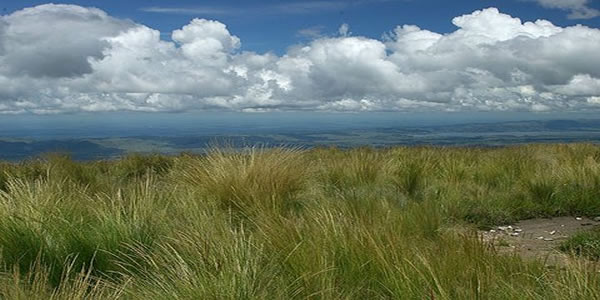 The land itself is unchanging.  Nowadays there are sweeping vistas of soya, wheat, sunflower and maize crops.  In the beginning you would have seen gentle undulating pastureland of tufted grass; dark, richly fertile and humid topsoil 50 cm deep at barely 130 metres above sea level crossed by a substantial river, the Río Tercero, part of a system that eventually flows into the Altantic.  In the early days the fauna and flora were rich and varied, the size of the river fish beyond myth - this we know from the memoirs of Richard Seymour - Pioneering in the Pampas (1869).

The picture on the cover is in fact his brother
Walter, who is mentioned later on. 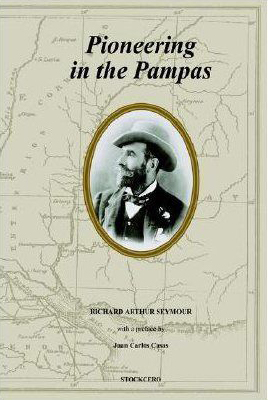 It was natural therefore, that the region should be well frequented going back to the colonial days of the sixteenth century.   It was then part of the viceroyalty of Alto Perú which at its height stretched from Patagonia to at either end of the Latin American continent.  The area was on the route travellers took while traversing all or part of the 3,200 km distance between , the large city in the south of the viceroyalty, and , its capital (now the capital of ).  The only other choice would have been to navigate up the river Paraná.

The area was known unofficially as Fraile Muerto – Dead Friar – because according to legend the body of a Catholic friar had once been found amid the carob and hackberry trees, fatally wounded by pumas or jaguars.   Until 1650 it remained as a staging post, when an officer in the Spanish army and his wife purchased a large tract of land there and turned it into an estancia, or large ranch.    They called it “Our Lady of Pure and Clean Conception”, but unsurprisingly it remained Fraile Muerto to most people.

During the 18th century the area had become a fort for defence against Indian raids and later in the following century evolved into a village when the frontier moved a little further away to the surrounding land being purchased and occupied by European pioneer farmers.  The village was located exactly half way between two flourishing cities, Rosario and Córdoba, and thus provided a convenient stopover for travellers.

For some there was no choice.  In 1807 Mariano and the heavily pregnant Loreta Ascasubi, descendants of freed slaves, were making their way to Buenos Aires in a horse-drawn cart to attend a wedding.  When they reached Fraile Muerto her waters broke, and she gave birth in the back of the vehicle to a little boy, Hilario.  When this child grew up he became one of the best exponents of gaucho literature, as every Argentine primary school pupil knows.

In the environs there were pitched battles not only between the creoles and Ranquel Indians, but also between opposing political factions, the federalists (supporters of provincial autonomous government) and unitarians (who wanted a government centralised in Buenos Aires, the capital).  One of its battles in November 1818 was so local in fact, that it was named El Combate de Fraile Muerto.   The charismatic local leader, federalist Felipe Álvarez was captured and taken as prisoner to the city of Mendoza in the foothills of the Andes, where he was executed.  (Commemorated in the painting below.  Felipe Alvarez is seated, and in uniform) 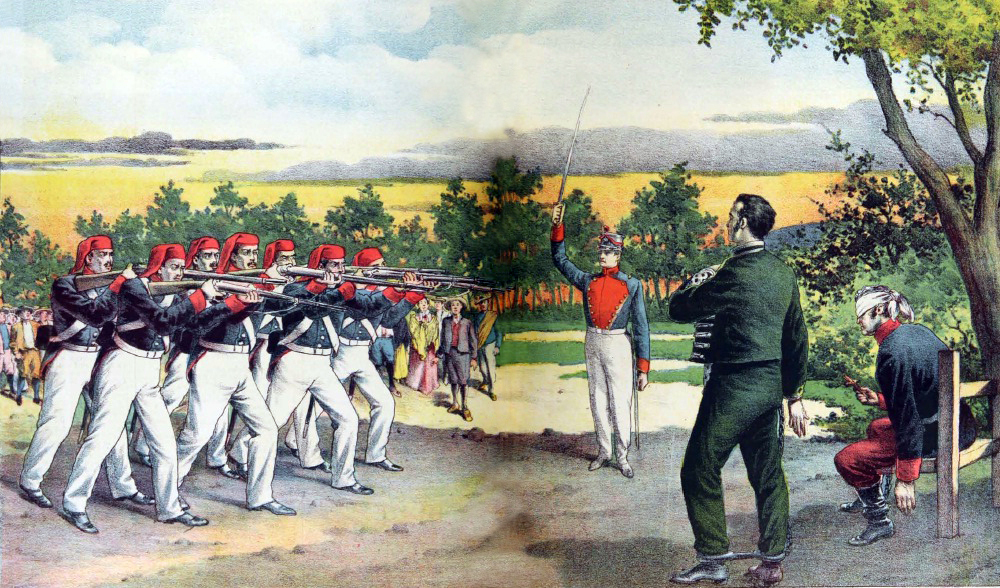 By government order his head was returned to Fraile Muerto, where it was put on display on a pike in the public plaza, until pressure from the family persuaded officials to take it down so they could give it a decent burial.  The civil war was to rumble on sporadically for several decades until 1852.

In the meantime, the village was visited by a delegation from the Vatican in 1824 which was on its way to Chile.  This was a great honour for the devout and God-fearing Catholic community of Fraile Muerto, which at this stage still only numbered some two hundred souls.  Nevertheless they spared no expense to make them welcome and the Delegation was so impressed in fact that as a sign of their gratitude, they promised on their return to Rome to send them a painting of the Virgin for their church.  This did indeed take place, though the process took a long time; the painting of the Immaculate Conception finally arrived 103 years later in 1927, and now adorns a parish church of the same name. 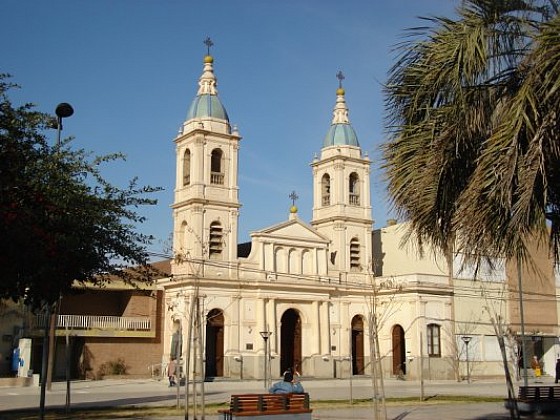 It was all the more venerated because one of the senior members of that 1824 Delegation – by name Giovanni Maria Mastai-Ferretti – became Pope Pius IX twenty-two years later.  He served for 32 years, the longest reigning elected pope in the history of the Catholic Church and the first ever to have visited South America.  He died in 1879, and my mother remembered her Italian grandmother – la Nonna – referring to him as il Pio Nono di santa memoria and quoting the oldest locals who remembered his visit as a young man when they were children. 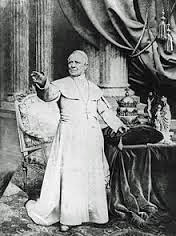 In the 1850s there was at last an effort to deal with the village’s outlandish name, and it was re-christened San Jerónimo.  The governor of the province declared that the old name was “inconvenient”.  It did not however take off, and “Dead Friar” it remained.

The country as a whole was ripe for foreign investment, with vast expanses of very fertile land waiting to be used and few nationals able to afford it. 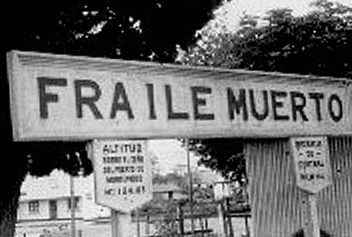 Bibliography will be listed at the end of the final post.  Anyone wanting credits for their photographs, please let me know.

Next instalment:  the arrival of the English pioneers and their first encounters with the indians.﻿