In my last post I commented that I had recently received such a shot in the arm to incentivise me that I’d virtually lost my appetite altogether. To explain it further I need to tell you the background story, but for those of you who feel lukewarm about wading through my stories to get at what you want to know, let me cut to the chase and tell you that it’s because I’m visiting Argentina in November. If you’re curious as to why this should rob me of my appetite, then read on. It’s in two parts, and I’ll post the second part in another couple of days.
. 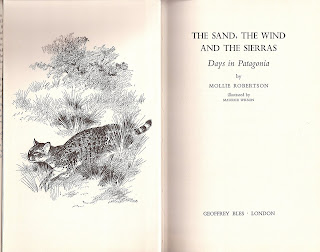 In 2005 when browsing on eBay I found a book called The Sand, the Wind and the Sierras – Days in Patagonia, by Mollie Robertson. The romantic title suggested it was a children’s story, and to an extent that’s what it is, but actually it’s also much more. In her book Mollie remembers 8 years of an enchanted childhood between 1916 and 1923, during which she lived on two British-owned sheep farms in the province of Río Negro, in northern Patagonia, Argentina, where she grew to love the land around her and the animals with which she came into contact.
.
She had dozens of pet animals, and they were of many different types – she even shared her bed with a foal on one occasion. There were few children of her age around, and the animals became her best friends. She understood their language, and communicated with them on a level not normally given to humans. Her father managed the farms, while her mother chaffed at the limitations the primitive life of those days placed upon her. They travelled back to England in 1923, and she never returned to South America. 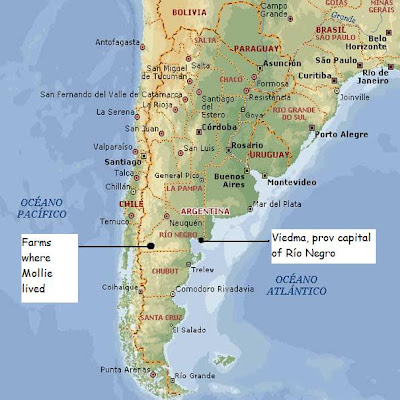 Those years had a profound effect on her, and in the 1960’s, when she was in her fifties, with encouragement from her husband, she wrote down the story. She never published anything else, which is surprising, because she was a gifted and lyrical writer, and I can guarantee you would laugh and cry with her all the way through the book. It is out of print, but easily obtainable on the internet.
.
I was interested enough to try to find out more about her and her family, but the internet didn’t reveal much, even though I had the advantage of being able to browse quite comfortably through the sites in the Spanish language. I stumbled across a chat room in Patagonia for locals of the village nearest to one of the farms, and I left a message there asking if anyone had heard of her family.
.

Six months later in 2006, when I had forgotten about it, I had a reply from Marcelo, an Argentine living in Nepal who had lived in the village many years before. He put me I touch with Luis, a man of native Patagonian descent who was very proud of his heritage and a mine of information on local lore. They became my penfriends, and I started to learn about a part of my own country on which I was completely ignorant. I proceeded to buy second-hand books about the subject from the internet, and became familiar with genealogy websites.
.

It was Marcelo who first suggested that I have a go at translating a chapter from the book into Spanish, and I found it stimulating and enjoyable – and hard work. If you speak another language but don’t converse in it on a regular basis, it’s up to your own efforts to keep fluent. I always alternated my reading for pleasure between English and Spanish, watched as many Spanish-speaking films as I could, and when my parents were alive and living in Spain I used my time with them to be out and about speaking as much as possible. But literary translation is a challenge because you have to translate the style as well as the language. I loved it.
. 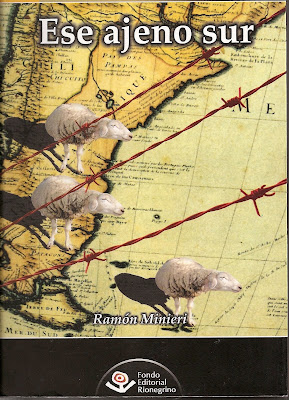 When he was on a visit to Argentina in 2007, Marcelo went to a book fair in Buenos Aires and met Ramón, writer, poet and historian who lived in northern Patagonia and had written a book about a British company that owned vast tracts of land in Patagonia, and used them to make massive profits from sheep-farming. Mollie Robertson’s golden memories were of years spent on two of their farms, so Marcelo knew I would be interested in the book. I was able to add Ramón to my list of penfriends shortly afterwards, and when he offered to have a look at my translation I gratefully jumped at the chance. He tells me now it was not going to set the literary world on fire, but he saw enough promise in it to encourage me to carry on, and fortunately didn’t tell me of his initial reaction.
.
-oOo-
(to be continued)
Go to Part 2
Return to most recent post
.

This is so awesome. I hope to learn Spanish in the next year.

A lady of taste! I'll let you know if and when the book is ever printed. (If all else fails I've a good mind to just get it printed myself...)
It would make a lovely screenplay too...
Caroline

Keep me posted to. This sounds like a great book and a awesome project for you.

I am actually starting basic latin spanish lessons (I am learning online), I have done a 13 week course in travel spanish but that was years ago and don't remember much, except "you are a cute man" and "my beer googles"!!!! (yes times of drunken backpacking!)LOL

I just caught up on your last few posts and would like to say thank you so much for your mention of me.....how lovely! I always wondered how you found me....but thank goodness you did....I always appreciate your comments on my blog and I have found your blog both inspiring and fascinating.

Sometimes it seems that you find a blog and you know you were meant to find it....for whatever reason.

Well done on joining the gym - I hope that it is helping you on your journey.

Your latest post is very intriguing, I am dying to read more! I can imagine that literary translation is quite the challenge.....I speak French and some Spanish and Italian so have read quite a few foreign language books and their translations in my time....good translation is definitely a skill!

You must have loved reading Mollie's book, I am sure it really spoke to you.

How wonderful too to find penfriends back in Argentina (or with Argentinian connections).

Loved looking at the map on your blog.....we have very good family friends who live in NYC, the mother is from Uruguay though and both her girls were born in Montevideo, they are very proud of their roots.

How exciting to be going on a trip there in November.....wow!!

Phew.....have written a post of my own on your blog LOL....sorry about that.